And the documentation to get started https://makecode.com/writing-docs/tutorials

Brian, that is very cool. Pasting an example markdown from github into the editor looks like a good way to figure it out.

Over the last few years I’ve had quite a bit of fun with micro:bits. Given I’ve been using the same ones all that time they were pretty good value. It is great to see them getting a bit more traction in Scottish schools.

We are to get some more free ones: Scottish schools to receive 20 micro:bits. This will be great. I’ve got access to plenty but the new ones have some nice new features. Built-in microphone, speaker, capacitive touch sensor, and power save button. The speaker will be particularly welcome, avoiding a bit of footering . The power button too as I’ve found that detaching the battery is quite tricky for small fingers. I hope they arrive soon.

There are also a lot more support events & materials for classes appearing.

19 May 11 – 11:45 Code Along with micro:bit – Relaxation & Mindful Breathing looks fun, but clashes with our sports day. My class did participate in a couple of similar scratch events via Teams. Although these were not anything I could not have covered myself. I did find the pupils were extra engaged with a virtual teacher and peers.

You don’t even need micro:bits to take part,

Micro:bit not required as you can still take part using the MakeCode simulator.

Which until this week I would have though was missing the point. The other day I was re-introducing some of my class to micro:bits. They had made simple rock, paper, scissors shakers. We were discussing the problem of knowing, for sure, if the shake had worked. Two similar results could be due to random selection or by nothing happening. While the pupils were playing with solutions to this one explained he was not going to flash the micro:bit every time. He preferred the simulator! This surprised me, as I think the device is a big draw for most pupils.

The other week New support for teachers launched today | micro:bit. I’ve already found the examples and projects on makecode.microbit.org very useful. I am looking forward to getting to try the ones for the new micro:bits.

In class we have been using the iOS micro:bit app rather than the web. This solves the issue of flashing the micro:bits via usb by using Bluetooth and works really well. We did a bit of work on our arcade devices this session. That meant pupils using the web downloading hex files on their iPads, air dropping to a MacBook and then transferring to the devices. Bluetooth avoids the “one MacBook” bottleneck.

The other bit of micro:bit information I have is that Glow Blogs now supports the embedding of the micro:bit simulator. This enables pupils to share their creations and keep a record of their achievements. I’ve just updated the microbit instructions for Glow Blogs. I hope to see some examples in the wild soon.

The event is now over, view our round-up below:

Some digital fun in class today

Now with speaker and microphone!
Same great features, easier ways to use sound and touch to get creative in the classroom

More features, including easy ways to take AI and ML into the classroom, will be released throughout 2021. Watch this space.

More details:
Working together on the latest BBC micro:bit

I’ve been using micro:bits for a few years now and these look like great additions, especially the sound in and out.

Given we have a good number in school already I doubt we will get new ones so having a bit of latest kit envy.

The illustrations on the page make the boards look gigantic.

micro:bit classroom
This looks as if it might be a really neat idea, local storage, no sign-in for teacher or pupils. Download everything and resume session later.
I am wondering if it will, now or soon, work with the iOS micro:bit app?

We finished the micro:bit decorations as planned last week.

The Biggies #microbit lights switch on. One microbit to rule them all. @digitallearnNL @DigiLearnScot pic.twitter.com/gWtmouvMbX 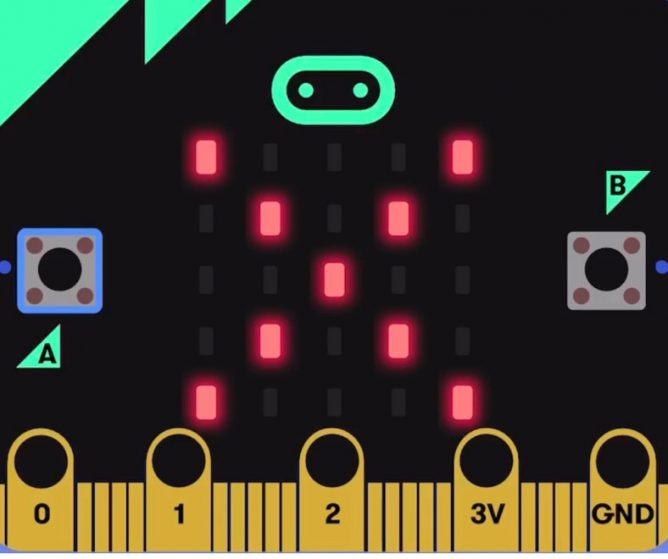 Last session we did a time consuming, but worthwhile, microbit guitar project. We’ve use them for decorations before and I thought this might be a simple intro for the new pupils in the class and a simple refresher for last years pupils.

Since I only use microbits now and then I need a wee practise too. I noticed a couple  of things using the iOS app and the MakeCode for micro:bit editor.

The app seems to have improved even since June. At that point we started finding it easy to create code and flash the microbits form our iPads. Today I tried the app on my phone and was surprised as to how easy it was to code (simply) a microbit on my phone.

The other is you can now embed makecode, the code or the emulator. This one is a dice and number picker, we made ones like this for maths games last session. Try the buttons and ‘shake’.

Maybe you could always embed code I didn’t notice it before. I am impressed by how the editor has improved over the last few years. The first few times I used micro:bits in class we stitched away from our iPads and used PCs, i can see no good reason for doing so now.