One of the things I like about blogging is how posts disappear into the archive to be forgotten.

Lots of broken links some of which I’ve fixed. Led me down rabbit hole of old posts.

(NB this was yesrterday’s on this day, forgot to publish)

I’ve often made an end of year posts reviewing my blogging. I though this year I might review my blog reading. These are a few of the sites I’ve enjoyed. The blogs I try not to miss and some I would love to be able to emulate.

Cogdog blog. Alan’s blog has been a constant in my life for years. Discussing sharing, sharing WordPress code and more wrapped in a real life with a real voice. I follow Alan wherever he roams.

Read Write Collect is my main education hosepipe filter. Aaron reads and comments on a huge range of educational and web tech blogs wrapped in a tasty IndieWeb coating.

I spend more time on the gentle, eclectic Micro.blog community/aggregator than social networks nowadays. @smokey is a one man community engine nearly every week he produces a post with a list of posts and pictures he has picked out. A few of us tried this for a while, as far as I know @smokey is the only one to have kept it up.

I love Tom Woodward’s Weekly Web Harvest which I think might be auto generated from pinboard. The rest of the blog certainly isn’t auto generated but is a must read too.

ScotEduBlogs, an aggregation of Scottish Educational bloggers. I run this as a gift to the community, but also because it means it is easy to read great stuff from across Scottish education at all levels.

I read a lot more via RSS. My twitter browsing has decreased but I have a couple of private lists one called regular & one for primary classroom folk.

I continue to find some really good resources on twitter. I do wish more of the teachers sharing would use a blog. (much easier to keep track of, organise etc). If they are in Scotland they could join in ScotEduBlogs too.

Featured image from Image from page 285 of “Studies in reading; teacher’s manual” (1919) on flickr no known copyright restrictions. 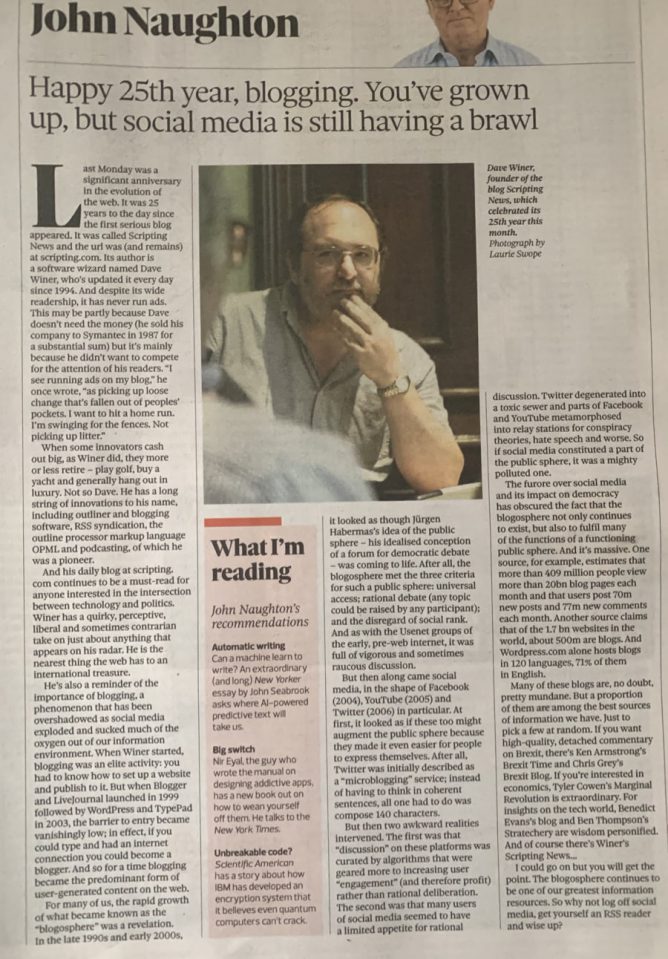 How cool to see @davewiner in the Observer this morning. It is like seeing someone you know (though obviously I don’t). John Naughton ends “So why not log off social media get yourself an RSS reader and wise up?” online version.

It’s a strange little word, impact. Impact. We hear it everywhere, use it often. ‘That action of one object forcibly coming into contact with another’ our dictionaries tell us. The impa…

I say this as one who has been blogging about teaching practice since 2011 and realise that this part of my teaching career is coming to an end. No big drama, no big story, I just don’t do it any more. But what impact has it had?

Kenny, you have had a big impact on me, one of the few blogs I subscribe to via email rather than RSS.

It has allowed me develop ideas more clearly, to articulate my thoughts on education.

I wonder if you will write in other places, another book? TES? If you do I hope you post a short note to your blog to let me and many other know. 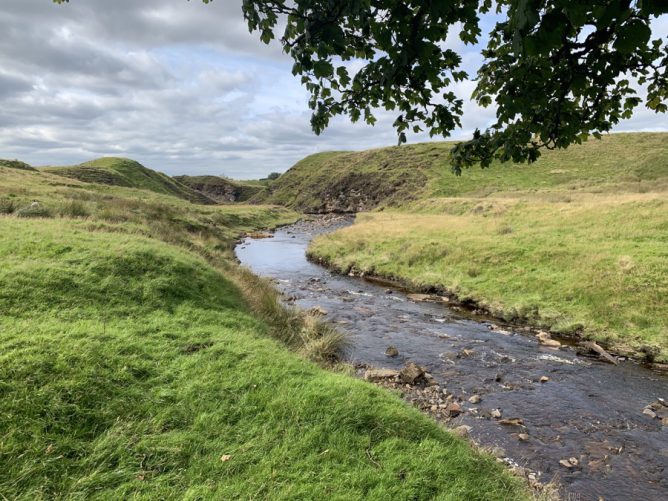 I’ve just changed the front page of my blog.

For the last few years most of the posts I write have not made it onto the front page, ending up in the status page instead. Now everything is going to the home page.

At the end of 2014 I started experimenting with some IndieWeb technology on my blog. In 2017 I started using the beta version of micro.blog, this meant I was posting on a wider variety of topics with lots of short status type posts.

I decided to keep these off the home page, reserving that for posts categorised as wwwd posts that were longer and about ‘Teaching, ict, and suchlike’. I added a status link to my menus along with a photos page. Now I’ve move back to everything on the home page.

As time went on my blogging has branched out to include recording the books I’ve read and films I’ve watched and other things. Some, not all yet, of my tweets and some of my replies to other blogs are now posted on this blog and auto post to twitter and the blog I am commenting on. I manually post the same photos to instagram as I do here and Bridgy brings back my comments to the blog.

I am not exactly breaking new indieweb ground her or even pushing very hard, but I am enjoying expanding my blogging, pulling in content posted elsewhere is the past and bringing my digital life a little closer together. I’ve changed the Status menu to Articles in case anyone is only interested in longer, likely educational, posts. As I blog more I see my blog as primarily for me with some added benefits from sharing.

Featured images, my own, the Garpel Water in Ayrshire an meandering stream.

Since my blog go updated and https is turned on I can expand my IndieWeb experiments a little.

The updates allow me to use my blog to sign on to other services. I am unsure of how this all work, but it akin to using facebook, twitter or google accounts to sign on to various services.

I’ve set up an account on aperture which is the first bit of a reader app, I then can use Microsub clients like Indigenous for iOS, Together and monocle to read and respond to these article, the responses will be posted through on my own blog.

For now I’ve only got a few sites flowing through aperture and I am unsure where this sits with my rss reading. I’ve made a few posts through the readers, with varying degrees of success. Certainly worth continuing with. Some of the services are in Beta mode, but because it all happens through my blog I will not lose any content that I create.

A test of snapthread which has been updated to version 2. When I tried the 1.8.1 version I rather liked it. It was then an app to stitch live photos into wee videos on iOS. Version 2 adds a lot more features. I still like it.

My class used the free version, limited to 30 seconds of video, last session a bit, we had a few crashes, but I think it is a promising app. Ease of use, limited time of the free version and lack of stickers, for now 2, are useful for the classroom. My class use iMovie and Clips too, but sometimes we might not want the greater complexity of iMovie or the wacky possibilities of clips.

Unfortunately CloudConvert doesn’t work for me on the school network, I’ve tried a few apps that convert and squash video but no really found a good one for pupils to use. I would like my pupils to be able to do that, to save space on their blogs and to speed up uploading. I am not sure on the official line on posting to silos in North Lanarkshire. Social media, especially twitter, is very popular. That is staff rather than pupil posting, I’d like my pupils to be involved in the uploading of video to their e-Portfolios and the class blog without my interference.

For Glow Blogs, I’d also like the app to change the file type to mp4 or m4v as .MOV files, that are apples favourite, don’t play nicely with all browsers. We made a change to standard WordPress functionality to accept .MOV files as video, but some browsers don’t play them. Strangely, just editing the file extension, from .MOV to .m4v works, at least for Chrome. I can’t find a way to change extensions on iOS but I’ve tested on the desktop.

FWIIW Snapthread’s videos are .MP4 when exported to the camera roll, so only need squashed for my needs.

@danielpunkass what a nice surprise, MarsEdit in Setapp and it picked up my blog from a previous beta install. Zero friction.

Closing off the 28 day blogging challenge, Kathleen Morris provides a list of strategies for maintaining momentum. On the flip side, Aaron Hogan provides a list of blogging rules that you do not have to follow. These include the idea that blogs need to look a certain way or be perfect.
10 Blogging R…

I feel more encouraged by the second list although there are some good ones in the first one too.

The idea of rules or the need to “maintain your blogging” seem staring to me.

Blog when it is fun or of value to you else don’t, works for me.

Since I have an on this day page on my blog I’ve been finding old me interesting.

Yesterday I notice quite a few end of year reviews published on the last day of the year1.

The links go to the internet archive now. Images and some links were broken but I enjoyed reading them.

I was surprised at the comments on the posts, from adults, pupils at other schools and classmates. At the time the idea of an audience and conversation was one of the main reasons I had pupils in my class blogging. We were posting photos, video, microcasting and writing poems.

It seems harder to get comments on pupils blog now. I admit I’ve not commented outside my own class lately.

This was the year before I was on twitter. A lot of the online conversation about what happens in classrooms has moved to there. While a lot of this is interesting and valuable it has mostly removed pupils from the publishing process 2. This is I believe a loss.