You can use the BBC micro:bit V2 with built-in speaker as a data logger, recording data from its built-in sensors. Data is stored on your micro:bit even when its power source is disconnected.

This looks really interesting. H.T. to @LouiseE_Foreman. The way the data is saved and accessible is very clever.

You can log data from any of the micro:bit inputs; light sensor, temperature sensor, pins, accelerometer, compass, microphone 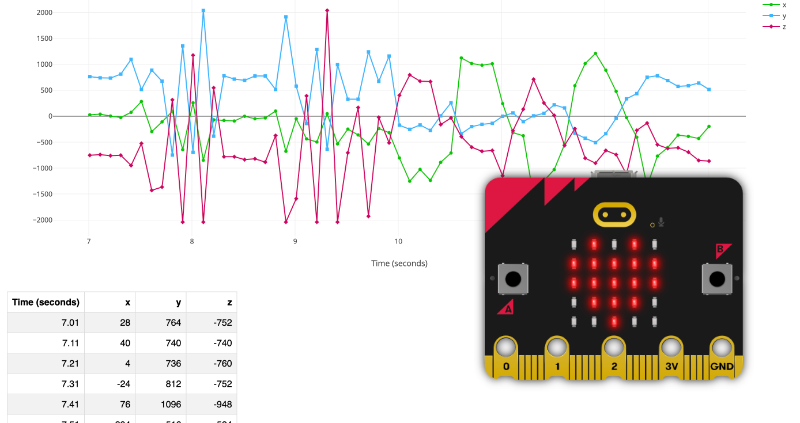 Interesting take on Scratch by a Developer & parent.

This recent growth has caused Scratch to break into the Tiobe index’s top 20 most popular programming languages. At the time of this post (July 2022) it ranks 21st, above Typescript, Rust, Julia, and other important languages. The Tiobe index is imperfect but there’s clearly something happening here.

Bryan points to some

It’s pretty impressive how ambitious the projects get. Scratchers often build copycats of “real” games like Cut the Rope, Super Mario Bros, and Terraria. Features like cloud variables allow them to make online multiplayer games, like Taco Burp (popular in my house)

This is quite a different degree of scratching than I’ve seen in my and other classroom recently.

A lot of food for thought, I never spend much time with scratch beyond preparing and experimenting with the most basic of things. I am not sure it is a rabbit hope I want to peer down for long. I think the simple types of things we do in class are enough for most of the pupils (along with micro:bits, lego and other coding). The advanced projects might be useful to point some of the more confident pupils at.

My class have been working very independently on writing, recording & editing a podcast episode, published on glowblogs of course.

Out now Episode 5 of the Banton Biggies Podcast. Written, recorded, edited and published by the pupils in p6-7https://t.co/2rpeKtQnCS

My Class had a lot of fun and a little maths with Balloon Car Racing. Here on the Banton Biggies’ Blog:

An account of a poetry lesson, with some thoughts on efficiency, on how we treat texts and on knowledge.

efficiency in teaching is a problematic idea. Of course time and energy shouldn’t be evaporated away by gimmickry or activity with no purpose. But an element of theatre, an injection of emotion, or a playful unwrapping of ideas can be worth the time if ideas are more memorably imprinted or are more deeply understood.

Interesting post in relation to knowledge, exploratory learning. I’ll be revisiting the blog for the primary section which looks really valuable.

I had a busy first week back after spring break, Robots, butterflies & teacakes:

Like many teachers who have spent the past year teaching virtually, I have had to get used to one sad reality: My eighth grade students rarely turn their cameras on — and very few are willing…

Hi Bill,
This is really interesting. I teach younger kids, primary 6-7 age 9-12 but I saw a gradual spread of turned of camera and lack of audio from my class over our second lockdown at the start of the year. As I was using teams, I used the text chat and got a lot more responses and considered ones using that.
Interestingly some of my class were in school, essential workers kids, there were a lot more vocal I presume because they were sitting in a room together and gained confidence from that.
I do occasionally use online responses in class and I’ll be thinking of easy ways to incorporate that in the future.

It involves the Draw Attention pro and my favourite plugin Display Posts.

I couldn’t test the idea at lunchtime as the network is down today.