New iPhone feature. This is cool. In class we used use keynote or online services to cut out images. This is even simpler. No need for green screen. Works on my 4yr old phone. Hope it comes to iPadOS.

Look Up in Photos is pretty cool. I’ve been a fan of Pl@ntNet for a while. I still think I prefer Pl@ntNet’s community feel & openness but this looks like it will be useful too.

the autocorrect algorithms try to figure out what you mean by looking at various things, including when your fingers hit the keys…

The important thing I’ve learned here has nothing to do with Wordle or WordleBot. It’s that I can use Shortcuts to make an image out any HTML/CSS. As long as I can stuff it into a data URL, I can make an image from it. Could be very useful.

I don’t use shortcuts all that much, but this looks interesting.

Apple exposing all the ways Facebook tracks you with it iOS app is really quite something pic.twitter.com/hDhB85qk1L

‎Slow Fast Slow is a nice app for changing speed of videos on iOS. I discovered it via a nice tutorial by
Andrew Brooks Rework Time – Playing with time using the Slow Fast Slow App with slow-motion video. I think my class might enjoy this especially if the sandpit is still full of water.

TikTok did not say whether the feature would be removed from Android devices, nor whether clipboard data was ever stored or moved from user devices

Given that the app is widely used by pupils and sometimes by educators this is interesting. 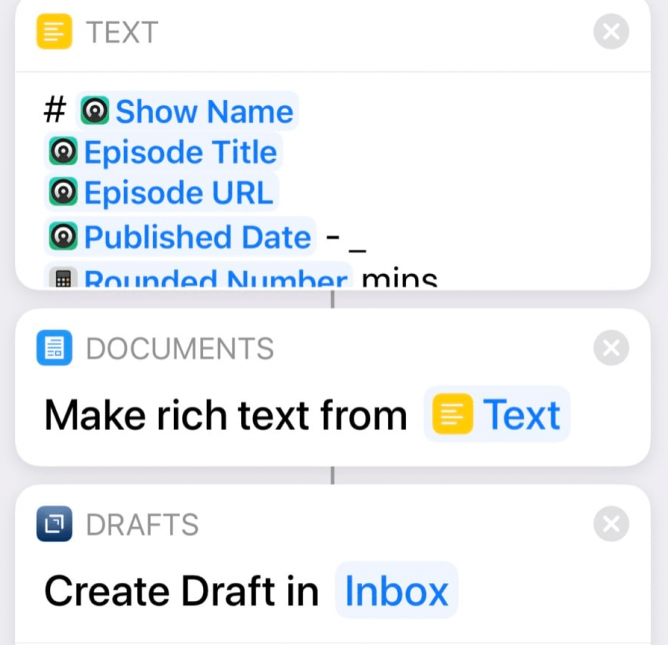 In normal times I listen to podcasts. As I do this on a commute I’ve only listened to 2 episodes since schools shut. I miss it.

When listening I often want to remember something for later, perhaps for a blog post or like, usually this ends in frustration as my memory fails. I imagined a podcast player that had voice control and would let you make voice notes. Today this imagining came true.

Castro, the podcast app I use, had an update. This includes a pile of very welcome Siri integration which will help with hands free problems.

Even better the addition of shortcuts and one of the examples gathers info about the current playing episode and allows you speak a note. This is collated with data about the episode, podcast name, Castro url, show notes, position and saved into a New note.

I managed to edit the shortcut to get the information into Drafts instead. I’ve tested it a few times and I am now good to go when commuting starts again on 11 August.

Fraser ran the first whole-school 1:1 iPad deployment and the whole post has me thinking.

A couple of sections stood out for me:

When we started with iPad in 2010, I suppose I thought that we were heading into a new era in education with creativity at the forefront. Particularly, I thought that Scotland’s Curriculum for Excellence was going to usher that in. We were led to believe that all different kinds of assessment materials would be considered appropriate for submission to our exam board. None of that happened, and we seem to be moving away from that idea at a steady clip.

Are we moving away from creativity is Scotland? Just for exams or across the board? Are iPadds more suited to creativity than chromebooks.

It seems to me that, for a school, the choice is whether you’re a GSuite school or an Office 365 school and everything flows from that decision. It’s quite difficult to transition from one productivity cloud to another and nobody will do that without a compelling reason. Google and Microsoft are matching each other blow-for-blow in cloud features, partly for each to make sure that the other never develops such a compelling advantage.

I wonder how Fraser choose between 0365 & GSuite?

Personally last session I’ve moved away from the cloud in class for pupil use. I found OneNotes and OneDrive to be a bit unreliable, lost pupils work and sometime time. I suspect this is due to our rather slow internet connection. I do depend on OneDrive and iCloud for taking work home. OneDrive is pretty much where I keep any curricular material now.
I now put up with the poorer organisation of Apple Notes and use Airdrop because it is some much faster and reliable than the cloud for me. Given there have been a huge number of updates to the O365 suite on iOS. I’ll kick the tyres again in the coming session.

I’d like to have the network that would speed things up and the opportunity to try GSuite. Although the cloud may be future, it is not yet evenly distributed.

It was gratifying to see Apple put serious effort into getting the desktop version of Google Docs working in iPadOS 13. However, it’s too little too late for us at this stage in our development. We might come back to iPad in years to come but, for the next four years at least, we’re going to see what GSuite and Chromebooks can do for us.

It is going to be fascinating reading the next chapter.