And the main one that influences how I use it is HyperCard.

I prefer keynote’s simpler interface, but this is a great description of using open ended software in the classroom.

Given I want a nice gentle start for my class this session I thought we would play with Vedic Squares. I was reminded of these and their possibilities from a tweet I’d bookmarked from Blair Minchin.

We started on Last Thursday making multiplication grids then vedic squares, making patterns by joining the same numbers with lines.

The next day we recreated the grids in Numbers. I then explained conditional highlighting so that the class could colour the grid. They were fascinated by both the process and the results. The Gallery below steps through the process.

The next step was to screenshot the grids and place them in keynote to duplicate and create symmetrical patterns. At this point some of the class started animating their patterns to rotate madly in keynote. At that point gifs became obvious;-)

Here is the process in Keynote.

For a gif purist like myself Keynote gifs are a bit off. Very big files indeed. This got a little better after I explained that they didn’t need 999 rotations for a gif, one would do. Getting rid of any easing in the rotation and any delay in the export gives a straightforward rotation.

A quick screencast of rotation settings and gif export:

I particularly enjoyed the excitement as the class saw the conditional highlighting in action and then that the animation step was suggested by the pupils. There is still a lot to explore around both the patterns and processes. I hope that the class will further explore both, opening up links to maths, R.E. and art.

Although we used iPad, Apple Numbers and Keynote I am sure you could do the same with Excel & PowerPoint.

Notes to self as I try and teach myself to teach remotely. See More lockdown learning for some sort of background.

I remember when Apple Keynote came out I really liked it. For me the interface was simpler than PowerPoint and the files took less space. Now I am making a daily PowerPoint for our class meeting I’ve notice the file size situation is reversed. Exporting a keynote to PowerPoint is resulting in a smaller file.
I am still using Keynote as I am quicker and happier with the simpler UI.

For our meetings I am making, for me, quite long, 20 – 40 slide presentation. I get the impression that leaving out transitions and keeping them simple speeds things up. Pupils sometime get a blank screen, some of them have found that opening the chat and closing it sorts that out. I guess forces a screen refresh.

I try to keep the meeting moving along, were are doing an hour a day, covering a few different things each day. Given primary, age 8-11, I can’t expect a lecture to work. Getting the pupils to respond with voice as much as possible. Sometimes in turn, sometimes fire-at-will.

I am only getting around half my class of 24 turning up most days and imaging this would be more difficult with a class of 30. 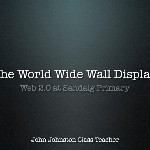 I had a bit of bother with this one. I’ve not used keynote much, but it was very easy to create a presentation with. While playing about with it I noticed you could record an audio soundtrack very easily and though I’d do that, export to quicktime or even youtube to let folk see what I’ve been talking about (and to play with the toys). Recording was easy enough, but when I came to export I got errors every time. A quick google fould more folk with the same problem and fixes for keynote 3 & 3, unfortunately I was using keynote 4 and the fixes didn’t work for me. I am guessing the problem has something to do with combining a recorded audio with movies and audio in the presentation. So what should have been a few minutes work turned into a few hours! I exported the presentation to jpgs, then I dug into the presentation package and found the narration audio. Next I imported the into GarageBand and one by one placed the images on the podcast track, adding urls as I went.

Next I exported the podcast to iWeb and published it, the first time I had used iWeb and again it seems easy enough to use without having to read a manual.

anyway here is a version of the presentation as an enhanced podcast.

As a by-product I now have a Podcast. I will not be adding to it very often, but I’ve got some audio from TeachMeet07 which I’ll publish soon. I didn’t manage to record all the presentations, but I’ve got some.