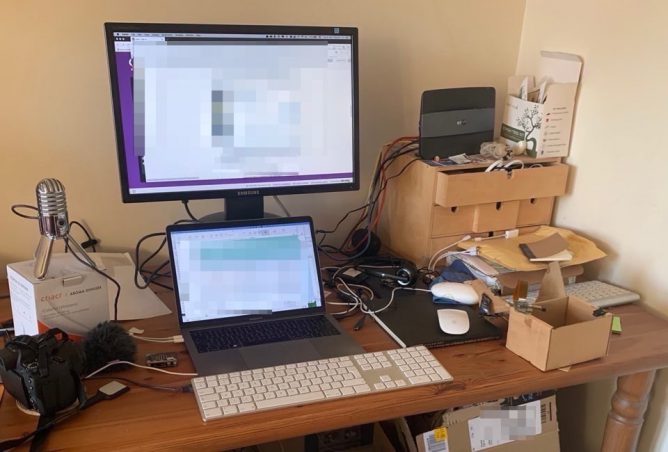 A few weeks ago I blogged about how I was tackling providing some home learning for my pupils. Since then we had a two week break and have been working on line for a couple of weeks since. The class is a multi-composite of p4 to 7, 24 children.

Some children continued to pop into our Class Team and post to their e-Portfolios over the break and I did make some Holiday homework suggestions.

Since the holidays I’m continuing on the path I started. A weekly post, with activity suggestions, monitoring and commenting of the portfolios and being available in our team at least 9-3.

I am getting a fair response on the e-Portfolios, these are Glow WordPress blogs the class are used to posting to. I’ve had over 200 posts since lockdown started with about 20 out of 24 children posting at least once. I’ve put, with permission, a selection of screenshots on our class blog: Learning at Home

We have started having a conference call every day in Teams. This lasts an hour and I’ve been doing alternative mornings and afternoons. I am finding that I need a fair bit of time to prep for this. The attendance has been around half the class.

The connection in Teams seems not too bad. I am basically working my way through a mini program from a PowerPoint deck. I am finding if I keep these as light as possible, without transitions that seems to work best technically. Some of the class who were using phones don’t seem to be able to see the slides but they have negotiated use of another device at times.

The different interfaces and affordances of Teams on different devices are frustrating. For example I can’t just start a meeting from my iPad in a channel. I can call an individual, or join one set up on a computer, just not kick one off. Guessing what is happening at the other end is fun too.

There also doesn’t seem to be a way on mobile or a table to see the meeting and the chat at the same time. This precludes pupil putting up their hand in the chat. That means that discussions can get either a bit confusing or we need to go round the room which takes a fair bit of time, or there are overlapping answers. I remember the ‘hands up’ feature in Flashmeeting many years ago. I see MS is starting to roll this out to the desktop apps, but it would be great to have in in mobile, web, phones and tablets my class are using.

I’ve begun to try muting all the mikes and telling the pupils to un-mute as a sort of hands up.

I try a range of things in the meeting, it is difficult to make it too interactive. I’ve tried having my phone & an iPad hooked in alongside my computer but failed to show the class anything. I thought the phone on a camera stand would be a great way to demo things. Turned out the video did not take over the main screen for most and the class could not see it. Coming out of presenting a PowerPoint and demoing on my Mac camera didn’t work very well either half the class could not see what I was doing. Swapping between PowerPoint and webcam seems problematic and opening the whiteboard slow.

I presume a lot of these problems are due the the huge number of folk using teams around the world, I wish they would stop with the TV adverts and give me some bandwidth;-)

We have tried number talks and quizzes. The whiteboard has sometimes worked for the number talks. Hard for the pupils on a computer to use with a mouse (me too). Demos on slides with questions and anything else I can think of. Most of the ideas I’ve seen around this sort of learning are aimed at secondary or tertiary students. I think primary might be a little different.

Last week we tried a writing lesson, we had discussed the poem maggie and milly and molly and may by E. E. Cummings each day during the week. On Thursday we tried to write out own versions. First we brainstormed in several sections: names, objects etc. One at a time with me talking for a couple of minutes, then two minutes writing time followed by the children telling the rest their ideas.

Next we went through in couplets in the same sort of way, I read a couplet, gave my own example and then had two minutes writing and then sharing. Not unlike you would do in class except I could not see what was going on or work briefly with individuals. I think it went well despite the strangeness of having two minute timed silences. We needed the silence as some pupils will just talk through the two minutes. I am beginning to like the mute all button.

I had hoped that some sort of flipped learning might be a way to go, but the videos I’ve suggested pupils watch don’t get as much reaction as simple worksheets or writing tasks the pupils can do and post to their e-Portfolios.

The class are usually really creative (cardboard, photos and poetry the last 3 post before lockdown on our blog). The don’t seem to pick up on the creative suggestions as much as I expected. I think they need a little more support and encouragement.

My plan is to slowly expand the range of activities and technologies I offer. Testing something new one week and using it a bit more the next. Taking things slowly.

The week before last we briefly tested Minecraft Education Edition. I managed to get it working on my Mac so that some of the children could login to the same world. This week we had a few more sessions, them most pupils we got in was 7, they seem to have fun. I write another post about that.

The next step is to start putting some assignments in teams and see how that goes. I tried one this week, got 9/24 pupils competing a quiz. As we didn’t use Teams in class I think we need or add these things slowly and make sure as many as want to can use the technology. I’ll try a couple more next week and see how it goes.

I am also wondering about spending a little more formal time in the Teams chat as opposed to a meeting. At the moment it is mostly used to announce the meetings and Minecraft sessions. A couple of pupils have handed work in there too as an alternative to their e-Portfolios.

We also use Sumdog, it is quite a popular activity in class but I’ve not had much take up from home. About half the children are using it but only for a short time each week. The NLC Sumdog completion starts on Friday so that might encourage a bit more use.

As I am getting more children involved in posting to their e-Portfolios than anything else to will continue to be one of the main focuses. Most of the class have posted there at least once, many frequently. One thing that surprises me is the number of pupils working on paper and uploading photos of the work to their blogs. I presume some of this is due to access to hardware.

Teams meeting have maxed at 13 pupils, out of a class of 24. Afternoons seem more popular than mornings, I think some pupils are sleeping late. I am switching to more afternoon meetings next week. I’ll also continue to try different ideas in the meeting, give pupils time to complete tasks in chunks as I did with the writing this week.

I am just learning the ins and outs of Teams by trying things out. I’ve seen a few useful videos and posts but mainly just test as I go. It might be time to step back a wee bit and find out more. Unfortunately a lot of information is aimed at secondary schools or business like environments where the variety and access to hardware is not a problem. Time researching software is also not time preparing for the class.

I am also feeling my way to the both the content and delivery in Teams. Again most of the advice I’ve seem seems to be around delivering a secondary course quite different from a multi-composite primary.

It would also be slightly daunting to think about who is in the audience. It certainly sounds like many in my class are in a shared space.

It is taking a surprising amount of time to do this. Several hours at the weekend to put together the weekly post and two to three to prep each Team meeting. Hopefully I’ll get better at this. I also am trying to quickly comment on e-Portfolios and reply in Teams. I try to keep everything light as I my main aim is to keep in touch with as many of the class as possible. Having a multi-composite makes planning more interesting.

I am very lucky in having a supportive wife, my daughter is grown and away, I’ve little in the way of home responsibilities. I’ve no ide how you would manage if you had kids at home or a partner that needed the living room space too…

This is very much a case of fumbling around in the dark. I’ve not read much about how other primary teachers are tackling this and wonder if there are any patterns emerging.