Someone has archived the Art Bits from HyperCard

This stack is fantastic for showing off just how much Apple could do with two colors.

Slowly, painfully, torturously, methodically—I’ve clipped out over 700 of these ******* things and stuck them on this page at their original size for your use and enjoyment. The entire thing is less than 300kb, after all the PNGs are optimized.

And the main one that influences how I use it is HyperCard.

I prefer keynote’s simpler interface, but this is a great description of using open ended software in the classroom.

An xTalk syntax, inspired by HyperTalk

Be still my beating heart. You had me at HyperTalk.

I've no idea if this is good or not. HyperCard for me was the notion that anyone can make shit. The internet now is SO SODDING DIFFICULT, it is excluding so many people from expressing themselves. Learn about HyperCard's role in early digital. https://twitter.com/HyperCardOnline/status/1316117804240822273

This stack:
Inigo Gets Out : Amanda Goodenough

changed my life! A friend showed me how to add a sound…

ViperCard is an open source rewrite of 1987’s HyperCard.

Apple’s forgotten software gem was a last breath for democratized computing. Can it be revived? 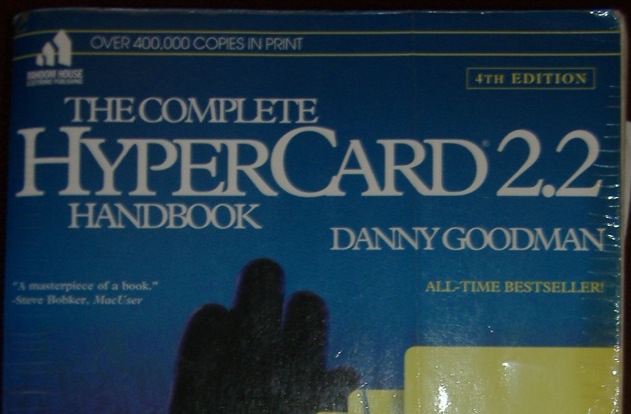 Linked from several mac blogs and news sites is the HyperCard episode of Simple Beep (Simple Beep is a podcast looking back at the history of Apple and the Mac community).

HyperCard is a pice of software that certainly changed my life, turning me from someone who had no interest in computers at all to someone who spent 10 years typing HyperTalk. I’ve blogged about it occasionally. The podcast is great. And there are great set of links in the shownotes including:

This reminds me that you can Run a Hypercard stack on a modern Mac (A quick test and I am excited again) and that I have a Color Classic that I should boot up sometime.

The featured Image of this post is one of my, many times read, HyperCard Handbook.

A while back I backed Next Generation LiveCode (Open Source) by RunRev Ltd on Kickstarter this week RUNRev released the Community Edition of LiveCode.

North Lanarkshire, where I work, is just starting to roll out Livecode to the high schools to their computing departments. Although I deal with primaries, this is quite exciting, I am a fairly longtime HyperCard and SuperCard user and Livecode shares the philosophy and english like scripting language of these wonderful tools.

Some of the links added to my pinboard this weekend:

I’ve noticed SNAP! (Build Your Own Blocks) for a while, this Scratch clone, runs in a browser and works fairly well on an iPad. I took it for a brief spin this afternoon. 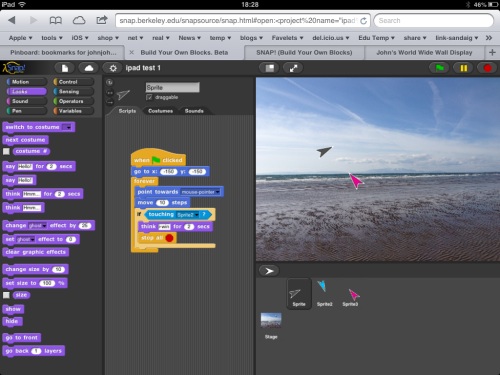 Sometimes dragging was a wee bit sticky and obviously arrow key message and the like are not present on the iPad, but worth a deeper look.

After updating a couple of simple web apps last week, I was greatly impressed by Forecast, its not a web app its an app you install from the web., of course in a completely different league from my scratchings, very impressive.

I’ve been struggling to move Radio Edutalk away from posterous. Just for fun I tested Justmigrate which claims to Move Posterous to Tumblr in few clicks and it does: enviable stuff. The first 100 posts are free, after that it cost money. I just move 100. (I now seem to have 3 tumblr blogs, one auto posts using ifttt, one for animated gifs and now this new one.)

Speaking of animated gifs: The increasingly hairy Doug Belshaw (That is not him on the left) was collecting animatedgifs I did a wee bit of scraping to throw the etherpad list of urls onto a page: Doug’s Gifs which should get your laptop fan blowing.

I’ve done a wee bit of webscraping in the past (for instance Which Way? which users ScraperWiki which didn’t exactly stretch the power of scraperwiki), but this is even simpler, just a php page with a regularExpression to grab all gif urls. I still do not really understand the magic of regEx but you can get a lot from google.

Tweeting my last post here I got a reply from Theo pointing to his new blog “Things May Come and Things May Go which I’ve been enjoying, this post: Open Education Priorities (Schools) asks some good questions of schools, I suspect the answers might disappoint.

the pinboard icon above if from The “Flat Web Icon Set” and distributed for free by Icons & Coffee under the “Creative Commons Attribution Share-Alike 3.0 Unported License”.

I just backed this project on Kickstarter. It aims to take LiveCode open source. LiveCode is a x-platform clone of the old macheads favourite HyperCard.

HyperCard is the application that turned me into someone who disliked computers and regarded then an improved Banda machine (Banda, HyperCard, really showing my age) into an enthusiast. Folk with less tolerant spouses should step away from the likes of LiveCode.

I am not a current user of LiveCode, although I bough a license a year or so ago. I tend to use the mac only SuperCard. At one time I even made some educational shareware with HyperCard and then SuperCard. Didn’t make much money but had a lot of fun. Over the years I’ve knocked up tools to do various fun things (from Animating Gifs to logging kids onto glow), but the real strength of LiveCode may be in coding for pupils. RunRev, the company that produce LiveCode think so too:

We believe that computational thinking and programming is a key form of digital literacy and that enabling a new generation to write interactive software is critically important in today’s economy.

LiveCode is used in hundreds of schools around the world to teach programming in STEM (science, technology, engineering and math) classes. It is uniquely suited for students in the 13 to 18 age groups. Every school that has used LiveCode for more than a year has seen a doubling of uptake in advanced computer science classes for boys and girls as well as an increase in exam pass rates!

I would imagine that the easy entry to programming that LiveCode provides (going on my HyperCard and Supercard experience here) would help get pupils that would not normally be interested in programming started while providing a accelerated development path for the code friendly ones.

Anyway I thought it worth a punt. RunRev are based in Edinburgh so a local company.