Just after I discover RSS in the “flowering” of theScotEduBlogs community I got interested in aggregating RSS and creating specialised readers. Back in around 2006 I was blogging some ideas which lead to Robert Jones & Pete Liddle creating the first iteration of the ScotEduBlogs aggregation. Later I moved the site to WordPress using the FeedWordPress plug-in. I’d seen this in use on the marvellous DS106 site which aggregates blogs of students and open participants of the many iterations of the notorious Digital Storytelling course. The flow on DS106 has pulled in 91749 (at time of writing) posts since 2010.

ScotEduBlogs is at a bit of a low at the moment, there are not so many folk blogging about education in Scotland. I still love the idea of ‘specialist’ or community aggregations or feed readers. Of course the site has an RSS feed that can be subscribed to. Dave Winer’s FeedLand, which I noted in a previous #FeedReaderFriday, can also create ‘News Products’ with similar results.

I like to follow some human aggregators, even better if they add their own opinions. One of my favourites in Arron Davis his Read Write Collect blog is an IndieWeb style collector of replies, bookmarks and other responses. RSS.

Some of Tom Woodward’s Bionic Teaching – utan blixt consists of his harvest of links with brief comment. This might be auto posted, perhaps from pinboard? He also posts about higher ed use of technology and, of particular interest to me, his work with WordPress. RSS

This post is part of a series with a wee bit about readers and a couple of suggestions of feeds to follow.

I really enjoyed your assessment of where you are currently at. I have wondered lately about my commitment to capturing my breadcrumbs lately and can really relate to your point about it being exhausting. I wonder if something like Roam is any less exhausting? I am left thinking that with so many of...

Hi Aaron,
I do hope you do not get too exhausted. I find you breadcrumb trail useful and interesting. In some ways breadcrumbs are a more productive vein to mine that piles of full  or loafs.

Although so many of the structures were carried online, one that was absent was a deliberate social space encapsulated in the yard. A part of me understands why. Some may abuse such an opportunity. There is no means of putting in place clear habits and policies before moving online. Also, it would become another thing for teachers to manage. Maybe such a space is the responsibility of home, I still think that this social side is one of the limitations to moving online, a place for play and experimentation.

This is fascinating, there was a lot of opacity between me and my class, this opens it up a bit. Your daughter’s school sounds a lot more organised in a daily fashion than my class.

I ended up setting up a  Minecraft edu server at home for the pupils to access. This turned into a social space as I set no real guidance, problem or focus. I thought of this as a playground. It certainly fits the description  a place for play and experimentation.

Aaron is wondering about Jetpack after reading Doug’s post about privacy. The post is fascinating and a useful reminder. On the Jetpack front I’ve got Jetpack installed but the “Publicize connections” & “Sharing buttons” turned off. I don’t see any traffic going to Facebook using two of the tool’s that Doug suggests. Perhaps Jetpack is OK? Or I don’t really know how to use the tools. 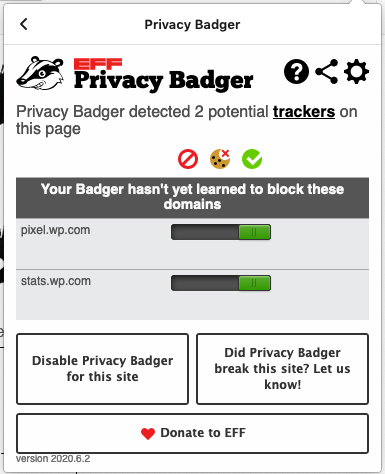 Alan, I am with @‪mrkrndvs, ‬”technology can be used for good and bad purpose“.  Even cookies/local storage handy to store state without DB. (This is a fascinating thread)

“@johnjohnston @IaninSheffield @Sfm36 @Miss_Anderson @athole @StephenReidEdu @IanStuart66 @claganach I am a POSSE kinda guy to be honest John. I will often carve a response on my site and then either send it via SNAP or copy it and then manually add the syndication link. Documented much of my workflow here https://t.co/8pmpBCxrPD”

POSSE is best, but I sometimes knee jerk or fire a quick tweet & then think that would be best on my site. I am also lazy & inconsistent. Some real gold in Managing Content Through Canonical Links, thanks

I have a new #IndieWeb itch, that is extend the search capabilities for my Commonplace Book. I have a practice of saving pertinent quotes within the response properties. However, on research, I have found that the standard WordPress site search only looks at the title and body. Although there seems ...

I realised I had the same itch! I think the custom google search would do the trick.  But I though it might be better to have something built in to WordPress. I found Search WordPress by Custom Fields without a Plugin | Adam Balée Designs, LLC. This requires you edit a functions.php file. I’ve already got one in my child theme so added the code there. It works.

There are very cools, asking to be giffed. So…

Setting up a local server was really simple. I managed to get the class having a little fun without really knowing much. These types of games are always a bit daunting for non-gamers like myself but the low entry barrier means I can tread carefully. I’d be interested to see what other schools are  doing with minetest and the similarities and differences with minecraft.