Because TiddlyWiki is radically customizable and allows you to think in new ways, it can be hard to "get it" if you haven't used it. In this video, I show what it looks like to be fluent in TiddlyWiki by creating a complete, functional application to track books and articles we've read and would like to read, in just over an hour. This video is 100% uncut and unrehearsed, programming mistakes and all. You can learn all the skills you need to do everything shown in this video with Grok TiddlyWiki (https://groktiddlywiki.com​ – coming soon!)

This was just great. I’ve been using TiddlyWiki on and of for a couple of years. I really like it but it has been tricky to really get into it. This was a revelation. Looking forward to Grok TiddlyWiki. In the meantime I’ll go over this video again.

Updated Google exempts its own websites from Chrome's automatic data-scrubbing feature, allowing the ads giant to potentially track you even when you've told it not to.

I found the Castro Podcast Player sideload function rips youtube to audio, saves that to a m4a in your iCloud/Castro folder and then you can then add it to your Queue. A nice alternative to huffduff-video.

I’m hoping to catch up on some blogging about stuff I have been doing with ds106.tv over the last month or so, but before that I wanted to quickly share an awesome tool that Chris Lott pointe…

I love YouTube-dl useful for lots of things. Some YouTube videos are blocked for me at work but I’ve got a Hazel script watching a folder in OneDrive on my home mac that will use YouTube-dl to download videos from ids in a text file added to the folder;-)

I just read this on OLDaily ~ by Stephen Downes in my RSS reader.

It seems to work, I’ve aded my own channel to my RSS reader, Inoreader, and it worked fine.

The feeds seem to lack description, inoreader (and I’d guess other RSS readers) pick up the video from the media:content tag (I’d guess).

This could be useful for bringing content together with other feeds. Perhaps YouTube will bring back tags too…

Create an introductory post, video, podcast, slideshow, etc., of yourself.  Tell us a little bit about yourself – perhaps, where you’re from, what you do, or what you want to be when you grow up – and let us know what you’d like to gain from #etmooc? A few paragraphs of text, or preferably, a form of visual or auditory media lasting between 30 seconds and 2 minutes is ideal. These are very rough guidelines – feel free to break every one of them if you wish.

from: #ETMOOC | A MOOC about educational technology & media – Coming January 2013

I recorded this with Quicktime thinking I could just trim without any edits, turned out I wanted to edit a wee bit so opened in in Screenflow to do a zoom or two. Would have just recorded into screenflow if I had known.

I saw a tweet mentioning me and the Flickr Search and Stamp for the iPod touch project on Friday. Clicking the link took me to Searching for CC images – SHea iPod Touch Project a post on Ian Guest’s posterous about:

a year long project between two schools, one in the London area and the other in Yorkshire. Students in two classes will be loaned an iPod Touch, for use both in school and at home.

The post contains a youtube video of how to use the Flickr Search and Stamp on an iPod touch and the blog has a lot of other interesting iPod Touch educational information.

I had mentioned this tool in a blog post and added it to the Interesting Ways to use an iPod Touch in the Classroom collaborative google presentation but have not blogged about it here..

The idea was to get around some copyright issues for children searching for images to create with on an ipod touch. Ideally children would save a photo, figure to the attribution and edit the photo to add this. That can be quite difficult and time consuming on an iPod touch so I though up this workaround. It searches flickr, only returning images that can be used and edited under a cc license, it then will produce an image with the attribution stamped onto it in the same way as my flickr CC search toy. 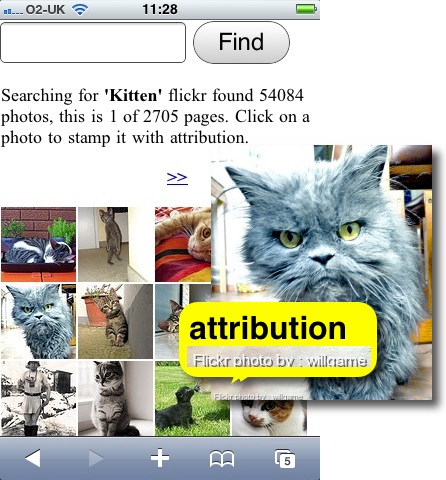 It is based on the iPod Touch Poems webapp I knocked together and has quite a few rough edges. I am sure I could improve the performance, interface & a lot more but it seems to work.

Here is Ian’s video, which should give you an idea of how the app works:

I’ve added a link from the page/Web app to the video to act as in app help so many thanks Ian for this. You can also get an idea of it the app work in this Simulator.

I’d appreciate any feedback on using the app, especially in class and ideas for improving it.