The 100,000 gif on Ski Pi was published yesterday. These are gifs create by one of my PIs which are automatically uploaded to tumblr every 15 minutes.

I think it might be time to repurpose that pi or switch to video or something else. The process was more fascinating that the result. I need a better view perhaps.

I’ve been beta testing micro.blog. There is a new page here for status type posts, these get sent to micro.blog/johnjohnston and to twitter.

This has renewed my interest in finding different ways to post to the blog especially for short posts that would have previously gone straight to twitter.

END_OF_DOCUMENT_TOKEN_TO_BE_REPLACED

I quite enjoy scripts and things that make my computing life a we bit easier. I’ve blogged a few times about AppleScript which I find very handy on my mac. On my iPhone I’ve never really found a way of automating things that stuck with me. I’ve downloaded and played with a few apps, but mostly they have felt a bit too convoluted for me.

I do regularly combine application to get a result, the so called app smashing, although I prefer the less destructive sounding playflow (I think I am the only person who does).

I’ve now found an application which looks like making this sort of thing on iOS a bit simpler: Workflow.

Workflow is more like Automator than AppleScript as it uses the same sort of block steps. You can combine any of the actions to create workflows. These steps or rather actions can deal with images, text, maps in all sorts of ways.

The think that makes this application stand out is that it has arrived hot on the heels of the iOS 8 improvements to inter application communication. You can set the application to the a Action Extension, this means it can be run from the share sheet in other applications. As you can set the input for a workflow to accept different things you can control the sheets where it will show.

In the screenshot below I’ve selected 2 photos and then hit the share button. When I click the Run Workflow button I can choose a workflow from the next screen(shown on the right) . In this case one choice is a simple workflow I made to downsize image an save it to the camera roll. 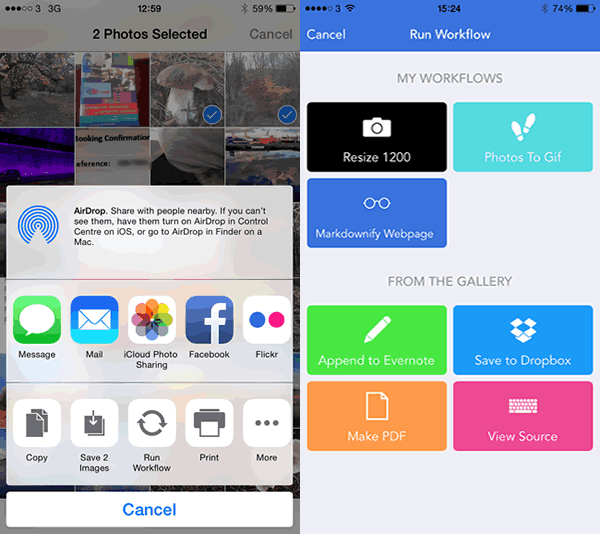 These workflows are made by dragging and dropping action blocks onto a workflow. Workflows can be set to be run from a icon added to your home screen, the Launch Center app or from share sheets in other apps. The latter can be set to accept different types of data and will then show up in the appropriate apps.

So far I’ve only made a few very simple workflows with two or three block, but there is potential to loop and have if-then type decision making. 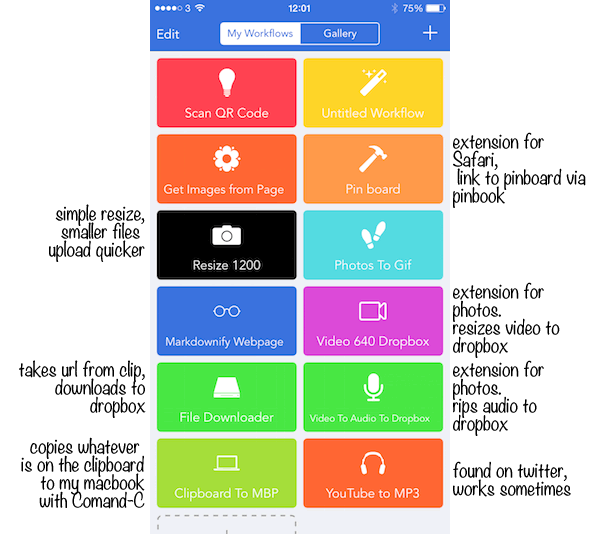 There are over 150 actions you can use to build a workflow: 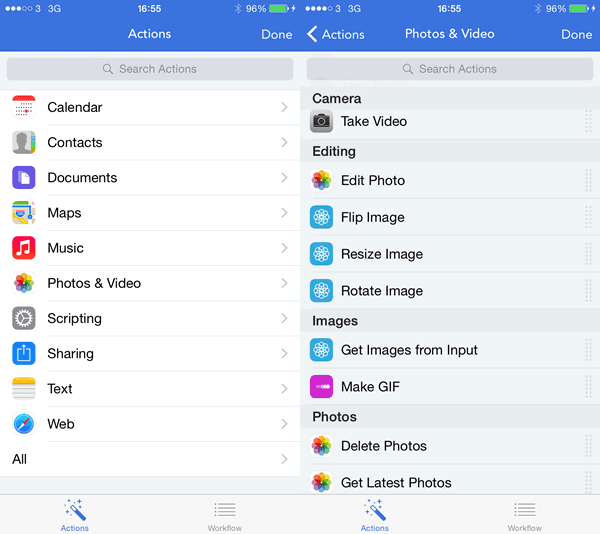 I’ve only scratched the surface of workflow over the last week or so, but it looks like it could make iOS more fun and effective.

Part of the setup for Radio EDUtalk consists of AutoDJ where various rotations of mp3s are automatically played on the Live shows and stream EDUtalk page. We have now got about 4GB of audio from the broadcasts and podcast. These files are uploaded to the Radio server. As we pay for storage I cycle through a few sets from time to time.
When we set this up initially it involved converting all of the mp3 files to 64kbps and mono. I posted a description of the workflow I used to do this here: Summer pt 1: Radio EDUtalk.

Since then I’ve been gathering all the audio added by simply subscribing to the Edutalk podcast in iTunes. Today I thought I’d sort out the most recent files (104 episodes had build up) and add them into the mix. The last time out I used id3tool to add tags to the audio. Unfortunately this uses a old version of id3 tags which means some of the titles are truncated. I decided to look for a new workflow.
I found ID3 Editor which has mac, windows and linux versions, costs £10 and comes with a commandline utility.

This means I can use LAME to make 64kbps mono versions of the files and then just copy the tags across from the original files. I think, in theory, I could extract the original tags with exiftool and pass them to LAME to write them to the new file, but that seems far to hard for me to work out.

So in the terminal I move into the Edutak directory and convert all files to 64 mono in new folder with:

This takes a wee while, and then this copies the id3 tags:

I have a folder full of files to upload to the server (which looks like taking a few hours).