Really grateful for the opportunity to contribute to @tes

“I’ve observed many benefits of using speech-to-text technology but there is one discernible outcome in the classroom that I’ve seen more than any other: smiles” 😃 https://twitter.com/tes/status/1378695104525910017

Notes & Airdrop are great pieces of tech in class. I particularly like the lack of features in notes allows pupils to concentrate on writing. I encourage pupils to start in notes even if writing that will end up in more complicated app.

As I’ve mentioned before we use Apple Notes a lot in our class. If the class are writing, unless there is a need for formatting or layout, I often ask the pupils just to stick to notes.

Notes are easily AirDropped to me when I need to collect work and both pupils and myself can organise them in a fairly simple manner.

Occasionally I want to print the pupils work. Notes, reasonably enough, only lets you to print one note at a time. I wondered if there was AppleScript that would help. I found Export Apple Notes via AppleScript which exported a folder of notes to a new TextEdit document. I altered it to:

Not particularly pretty, I guess I could work on the styles a little.

You need to be in my lucky position of having a mac in your classroom. Mine uses the same account as my iPad which helps me organise thing a lot.

Here is the code, I suspect it could be improved. Even if you don’t use AppleScript is easy enough to run. Open the AppleScript editor, create a new script, paste the code below in and hit run. You will be asked to choose a folder and then name an html file. The file will be created and opened with your default browser.
You then can print.

hosted with ❤ by GitHub 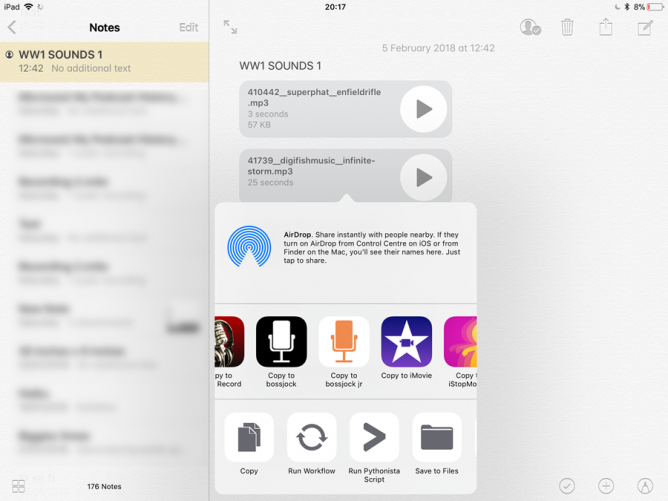 My class have been writing short descriptive passages about soldiers in the WW1 trenches.

At the weekend I planned for them to record these over a background of sound effects. I had spent some time at freesound.org and downloaded 20 or so effects and sounds. I had converted these to MP3 files, to reduce file size and placed these in a folder in OneDrive which I then shared. I have also made a list of credits for the files, all are Creative Commons.

The plan was to get the class to listen to the files in OneDrive then ‘open’ the ones they wanted to use in bossjock jr. These could then be loaded into ‘carts’ alongside the voice recordings. The pupils then played the different sounds and record that for their final mix.

To make sure everything went smoothly I got the whole class to open OneDrive and make sure they were logged in. That first step worked fine. The problem was OneDrive reported that there was not an internet connection and showed no files or folders. Since the class had logged into Glow this was obviously wrong.

I ended using most of the morning interval and lunchtime trying to see where the problem was. Strangely when I opened the iOS Files app when also allows you to see OneDrive files, I started slowly seeing files on the pupils iPads. And when I switched back to OneDrive the appeared there. To give the pupils access to the shared folder I needed to send a url. This opens OneDrive, and that told me I needed to open the browser, doing this, and signing on to Glow again (in the browser this time) eventually gave pupils iPads a view of the shared folder. Unfortunately I couldn’t get these to open and then open in bossjock in a timely fashion. It just was taking too long.

Time for a rethink.

On my iPad I had earlier made the files available off line in OneDrive. This took a while. I did manage to see the files in the Files app, from there I copied the MP3 files to the Notes app. 2 notes with about 10 files each. I quickly tested sharing these notes via Airdrop, it was pretty quick.

I suspected that airdropping notes with 10 audio attachments might be a bit slow, especially without Apple Classroom. I was wrong. In the afternoon I just dropped the notes to the pupils in groups of 4 or 5 at a time and in 10 minutes had distributed 20 audio files to all of the class. From there they could listen to the files in notes and copy the ones they liked to bossjock.

The rest of the afternoon when well, the children recorded their voices and mixed in the sound effects. For a first try the results were good. Next time I think we will record the audio live over the backgrounds that would allow us to duck the effects and make sure all of the words were clear. I think once the logistics of moving audio onto the iPads was sorted it becomes an interesting and valuable lesson. Fortunately the class missed all of the boring bits and no one asked why we had opened OneDrive earlier in the day.