The music lives on – Apple

iPod touch will be available while supplies last

I feel quite sad about this. I don’t think the iPod every got the traction it deserved in the classroom.

Back in the late 2000s I had a click wheel iPod in my class. It was a great device for recording audio on the move. Despite the low quality of recording by class found it really easy to use compared with other recorders at the time.

In 2010 I was involved in supporting a class using 1–2–1 iPod touches, and blogged a fair bit about it I though. They had a great deal of potential for the primary classroom. The introduction of the iPad put paid to that. I still think that a pocketable device might have been useful in school. Reviewing these old posts I found quite a few records of efforts to develop ideas for using webpages for teaching and learning with iPods. I had a bit of fun with that.

In my fantasy classroom pupils would be equipped with iPod touches and MacBooks, maybe the lovely 11 inch Air.

As a follow up to the previous post I took some photos a few short videos and recorded some mp3s on a walk on Friday.

The idea was to knit them together quickly into movie.

I started with Splice the first rather ambitious attempt to import 60 stills and have a dozen videos crashed the app. I found that I could import a dozen at a time worked until I hit about 50 the app then crashed, multiple attempts to open the project again failed and I moved on to iMovie.

Importing image one at a time was a bit tedious, so I only managed about 40, along with 5 or 6 short video segments (10-15 seconds each) by the time I’d added all of these iMovie had become a little sluggish but it was still possible to edit.

I suspect that the Splice crash & iMove sluggishness were caused by the number of clips as opposed to the short total length. This is probably not the best use of an ios video editor.

I was disappointed to find that I could not use the extra audio recorded even after I had move it into iTunes and synced it with my phone. Although I could select the audio files they did not appear in the movie. I expect that even if they had they would have acted as background music rather than movable sound effects.

I exported the movie a couple of times, first as HD- 720p which resulted in a 272mb movie on my desktop. Then as a Large – 540p movie this was 141MB
Both saved as iPhone movies with QuickTime to 22MB, this for a 3 and a half minute movie.

It has taken me a while to get round to the second post based on a morning at Glencairn primary working on the ipod touch project. In fact the pupils have beat me to it: Comic Twist.

After syncing the ipods I did a wee bit of work with the class on their new apps.

The first app was Comic Twist which allows you to create comics with up to 3 panes a little like Comic Touch, the Comic Life for the ipod/phone. I went for comic touch as it is cheaper that Comic Touch and does 3 panes in a comic.

The second app is i think going to be a great one, it has been sitting in front of my nose for quite while, firstClass. FirstClass is the email and communication systems used in North Lanarkshire Education and I have been rather slow to realise its potential for all sort of things. It is a great way to have discussions, share files etc. I’ve used the mobile client on my iPhone a lot mostly for email, it is amazingly quick even in an area with a very poor mobile connection.

I just had not thought of using it with pupils. The weekend before the iPod touch conference it suddenly dawned on me that we could use it to pass files around the classroom, messaging etc. At the conference the children from the Friezland iPod Project were using firstClass in this way. So when I got to return to Glencairn I synced the iPods with new software and showed the pupils their new firstClass account. We are only using one account for all the ipods to share but the children could easily upload images (created with comic touch) and join in a discussion. The images and discussions can of course be accessed on a desktop or via the web. This makes it very easy to get text images and files onto and off the iPods. We could add movies to a file store in firstClass on the desktop and access it on the touches. We even quickly tested exporting a keynote presentation that some pupils were working on and uploading it, it worked a treat.

Click on the thumbnails to see bigger versions of desktop and iPod views. 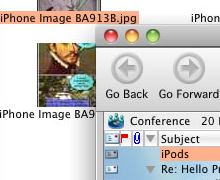 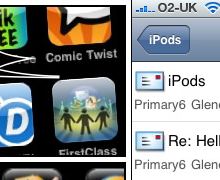 I think FirstClass is going to be very useful for working with iPod touches in the classroom.