I’ve been interested in combining maps and media for a while now. Here is a recap of some of the methods I’ve been using. I’ve not often had the chance to do this sort of thing in a teaching situation but continue to believe that mapping media would be a valuable way to record experiences for pupils and a nice slant on digital storytelling.

Last Sunday I had a walk to Benvane & Ben Ledi recorded the gpx with the iPhone Trails app (one of my top 10 apps) took photos, video and some panoramas. Here are the three ways I’ve been developing of displaying them on the web. None of these are good as examples of story telling as I am still thinking about the workflow and tech.

Photos on the map 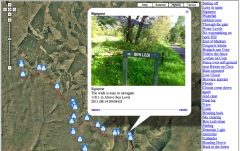 I’ve built up a fair collection of these over the last few years. this one only uses iPhone photos which means I can skip the stage of matching photos to the gpx file. When I started doing these google maps API was at version 1, I move to 2 and now am behind version 3.

This is the most conventional story combining an image with text in a liner fashion along the track.

I just blogged about this in the previous post

I am hoping that this can produce a more contemplative result.

Although I’ve only just worked out how to do this the workflow is a lot simpler than the photo maps. I’ve developed a mac application (using SuperCard) to make these. All I need to do is to drag some iphone videos out of iPhoto onto the application and it creates the smaller versions of the video and the HTML to display them along side the maps

I you have a mac and would be interested in trying the app, let me know.

This is the most recent development, after tweeting about the Video Maps @drewburrett suggested using photosynth for the iPhone to take pano photos and do something similar. I’ve not got a workflow for creating these and don’t think I’ve got the display method right yet but I am quite excited about working out different ways to present pano photos.

As I said I’ve been messing with maps and media for a long time (2006 example) I’ve blogged about it a fair bit, pretty much in a vacuum. I’d be really interested in finding some folk to play along with or a school interested in trying out some of this stuff.