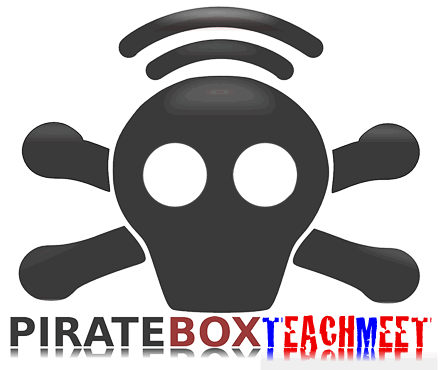 I am wondering if folk would donate a few quid for a TeachMeet PirateBox?

I’d noticed Alan Levine blogging about StoryBox and even donated a file in after this post: StoryBox Wants YOU – CogDogBlog.

More recently I saw it on Doug Belshaw’s Synechism Ltd. – User Outcomes Weekly – #11 (A weekly must read), where I commented wonder if a piratebox of some sort would be a useful addition to TeachMeets and the like? Doug had also linked to the PirateBox site where I read more about it and followed some links.

Obviously TeachMeets do not need the subversion of tracking and preservation of user privacy that a PirateBox offers. Nor would sharing of copyrighted material be desirable, but It might be fun to have a PirateBox at TeachMeets.

It would allow folk to share files with others at the meet. If it was a traveling project, the box could go from TeachMeet to TeachMeet spreading files as it went. This would provide a sponsor-less goodie bag. Folk would be free to share what they liked, perhaps presenters would share presentations, digital musicians give away background music etc.

Having looked at the PirateBox DIY it looks like the cheapest way to make one is to use a Buffalo WZR-HP-G300NH wireless router which costs about £70. There are a few other bits and pieces needed but the cost is negligible.

I’d like to put one together, take it to TeachMeet SLF11 and then post it off to another TeachMeet. Unfortunately I don’t have £70 Is there enough folk interested in putting in a fiver to make a box and set it adrift?

If you are interested then DM tweet @johnjohnston, leave a comment here or make contact in another way, if I get a dozen people up for it I’ll send then a link to paypal me a fiver. As a PirateBox utilizes Free, Libre and Open Source software (FLOSS) I don’t think this is one for commercial sponsorship. If you do contribute you will get a warm fuzzy feeling and your name on the PirateBox.