I’d love to give this a go. Maybe to reboot radio edutalk

Reclaim Cloud – Reclaim Your Adventure! looks interesting. Might poke around in the beta, but probably way over my head, needs and pay grade…

This post has been brewing for over  three months now. I think I just need to post it.

More and more of our computer use involves networks and cloud storage. A while back I was joined on Radio Edutalk by Sarah Clark who spelt out the benefits of the cloud in the classroom.

This is great if you have the connection and bandwidth. Some folk do not. This was brought to the front of my mind by a tweet by Andrew Jewell:

Full house @studiovenues Glasgow for our iPad without WiFi education event. A great way to start a week! @WeareXMA

Thankfully I am not in that position, but although my class are 1-2-1 iPads we don’t have the broadest band in the world. I do a few different things that mitigate against poor connectivity that I though worth sharing.

I want to cut down as much network traffic as possible so that when we use the internet we get the best possible connections.

We Don’t do iCloud

Out of the box iPads want to use iCloud for storing files. For my personal and school devices I would not be without several ‘clouds’, my phone uses dropbox, iCloud and OneDrive. I use iCloud and OneDrive on my school iPad and desktop too. As I am lucky enough to have a mac in my classroom I sync somethings with iCloud so they are available on both devices, mac and iPad. This is very handy. I can write a note on my mac in the Notes app, it syncs to the iPad and I then can drop it to a group via the Classroom. I can edit pages and keynote files on both devices seamlessly. I keep a lot of materials in OneDrive and the app keeps my home computer and school one in sync.

However I get my pupils to turn off most of the iCloud features. Since they do not use multiple devices with the same account they don’t need all their photos and documents syncing. Opening documents with the native iOS apps such as pages and keynote is a lot faster if the documents are local.

A couple of years ago I centred our document Workflow around O365, OneDrive and OneNote. OneNote especially is marvellous for this, the Class Notebooks in particular give you a tremendous amount of organisation. Unfortunately we spent a fair bit of time waiting for things to open and lost a fair amount of pupils work in OneNote 1 so don’t use it anymore. I will keep an eye on the app and out network and return to it if conditions allow.

We do do AirDrop

The answer to my handing out and gathering in of digital assets is now AirDrop and Notes. Notes has really matured over the last few years and has managed to keep its simplicity and gain features. I send out a lot of ‘tasks’ or success criteria via notes. I use it to share audio files along side text and pupils can send me notes easily. My pupils send me finished work, for example, recording of their reading alongside their self assessment2. If I had to guess the most use apps in my class would be Notes and Photos.

AirDrop is a really good way to distribute large files. A bunch of pupils watching video on the network will really slow things down. I can drop the same video to my class or a group amazingly quickly.

AirDrop avoids the cloud sending from device to device directly.

Airdrop is much enhanced by using Apple Classroom, this allows you to set up classes and groups of pupils, you can Airdrop to the whole class or a group. More importantly the teacher’s iPad can receive files from pupils without intervention.

Of course classroom does some other things but I love AirDrop the most.

What I miss from this system is the organisation that is built into multi-user cloud solutions. Reviewing pupils work and giving feedback was easier in OneNote. I may get the class to turn on iCloud for Notes at some point and see if sharing notes is practical for me. I suspect that the amount of data used by notes will be a lot less than OneNote.

A Cache in Hand 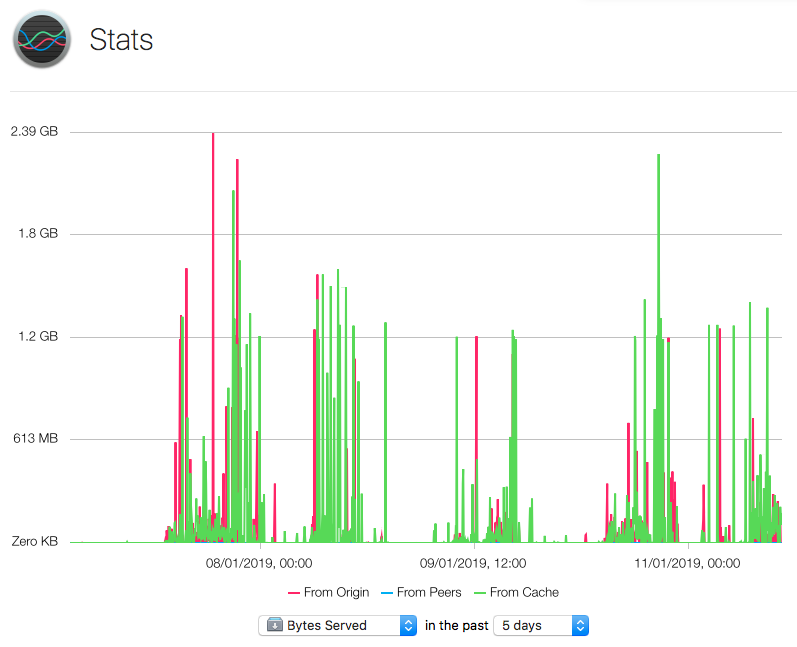 Here we are entering geekier territory, and you need a mac (there might be other ways I don’t know about). You can buy, in the mac app store, the Server App. Or if you have a newer mac than mine you can use the built in Caching Service.

The Server app can cache content locally so that if more than one device is downloading the same content the later ones can get the data from the local cache rather than going out to the internet. This seems to help installing the same app across multiple iPads. You can see from the screenshot that a lot of the data reaching our iPads comes from the local cache rather than from the internet. In my experience this seems to speed up updating a bunch of iPads or installing a bunch of apps.

A Web of One’s Own

Hand in had with the caching the server app can do it can also serve webpages locally. This is a good alternative to AirDrop to share piles of photos. Rather than send them all to all of the iPads I can set up a web gallery on the mac and pupils can visit it via their browsers. This is probably beyond what most teacher are willing to do but if you can it is a good way to distribute files where pupils can choose form a range of images. Better than giving them all 100 images to choose from and fill up their iPads.

Once you have turned on web-serving it is just a case of building a website in the same ways as you would create an external site. It would be very useful do be able to do that automatically. The local urls will not be pretty or easy to type, but the pupils don’t need to as I will AirDrop the urls to them.

None of this is ideal compared to a fast connection and a cloud solution but in the meantime it lets us get the job done with the minimum of waiting for the network. When we do need the internet, and we do, we get as much goodness as possible from it.

This is temporary and experimental

For all the reasons Sarah went over, the cloud is, long term, the way to go. I hope these things help make the technology less visible in my classroom in the short term. I’d also be interested in other and better ways to improve my classroom connectiivity.

see: OneNote Help Wanted ↩
Notes and Airdrop to the rescue  ↩