Back in March I had a wee shot of periscope. Since then I’ve sen a few notifications pop up on my screen, but not often had the chance to watch. Often they are fairly trivial, folk at the zoo or watching traffic or just testing the app.

because i enjoy living on the edge, gonna try broadcasting my #UMGRC presentation in 25min on a platform i’ve never used. #whee #periscope

And hit the link. Turned out it was a presentation at ‎UPEI Multidisciplinary Graduate Research Conference from a Workshop by Dr. Bonnie Stewart 1 on Becoming a Networked Scholar. 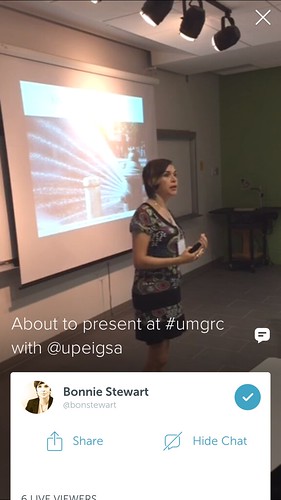 I watch the first 45 minutes of the broadcast from a couple of different rooms at home. A very engaging presentation on social media in Higher Education, much in my opinion directly transferable to PL in primary and secondary education. For a short while you can see the video at: Bonnie Stewart on Periscope, but I don’t think that will be around for long. After I tweeted out the fact I was watching some one asked me about the quality:

@daniellynds @UPEIGSA sound is great, visual not too bad, scren hard to see, but hey, other side of the world via a phone!

In the age of mobile we take for granted tons of things, but we now have amazing power to communicate in our pockets. For her tweets it appears Bonnie joined periscope just before she started broadcasting. It certainly didn’t take any technical expertise on my part to watch.

As I tweeted, the audio and indeed the video was very clear and synchronised. The Screenshot is slightly blurrier than average. The projector screen was not to clear, but the whole thing was very watchable. NB. bonnie’s slides are up here: Becoming a Networked Scholar.

I was supposed to be going to the post office but delayed as long as possible, I am pretty sure that the stream would hold up on 3 or 4g but unfortunately the audio is cut off when the lock screen is on. That might be an improvement for periscope or my audio bias showing.

This has certainly given me the idea that you can broadcast with periscope with a deal of confidence and make a good fist of it without a lot of prep. I guess if you wanted someone could screen capture the video. Looks like it might be a useful TeachMeet tool, classroom use would have to be though about carefully, but it could certainly be used to bring video into a classroom simply. With more and more primary classes using twitter it doesn’t seem much of a jump to use a teacher’s phone to project onto a screen or, network allowing, to watch on a desktop.

1. Bonnie and her students were central to one of my favourite Raido #EDUtalk broadcasts, Radio #EDUtalk 06-03-2014: #ed473 ‘Considering networked communications for educators’ | EDUtalk ↩

One thought on “Periscope Again – @bonstewart in action”