Two years ago David Noble and myself started a open to all podcasting project: SLFtalk, “a project to gather the voices of educators attending the Scottish Learning Festival 2009“.

The idea was to hear from a range of folk attending SLF 2009, gathering their experiences and opinions. It was, in my opinion a success.

Shortly after SLF09 we took the idea forward with EDUtalk – Audio publishing by educators, using mobile devices 1 and over the last two years and we have had 332 audio files posted on EDUtalk.cc.

This year it looks like LTS Education Scotlandare joining in the fun. They have a AudioBoo channel, Glow Radio and it looks like they are going to be tagging their boos so that they will be picked up by EDUtalk. AudioBoo is only one of the ways you can add your voice to EDUtalk.

There is an ongoing open invitation to anyone interested in Education to add their voice to EDUtalk.

Obviously it would be great to get some reports and thoughts about the Scottish Learning Festival or #EduScotICT from a wide a range of voices as possible.

Instructions for adding your audio to EDUtalk are on the site: How to EDUtalk and both David (@parslad) and I (@johnjohnston) are happy to help or try and answer any questions.

If you are going to SLF11 please pick up your phone and EDUtalk.

1. I’ve blogged about this a fair bit↩

A bit of a mouthful, but this is the title of our Scottish Learning Festival Seminar.

David Noble and myself will be running a seminar: Sharing Curriculum Change through the EDUtalk Project to talk about Edutalk on Wednesday 22 September at 12:30

We will hopefully give practical demonstrations of how the technology works and explain the thinking behind it. It should be fun.

As part of EDUtalk we hope that folk will be creating short reports and thoughts about SLF on EDUtalk, in the same way as last year but using the tag edutalk on audioboo and iPadio. Participants can also email audio to post@EDUtalk.posterous.com or phone Gabcast (033 0808 0214 channel 30938 and # password 1234 and # when asked
record your audio and press # when finished)

Full details of how to send audio to EduTalk are on the How to EDUtalk page. Further help from twitter: @johnjohnston or @parslad 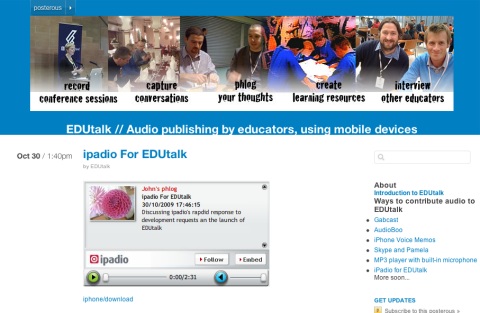 After the success of SLFtalk David and I have been chatting about how to take the idea forward. It seemed a good idea to continue to provide educators the opportunity to post short podcasts with as low a technical barrier as possible. David has pushed this on by getting the EDUtalk.cc domain name and applying it to a new posterous site we have spent a bit of time preparing the site, writing instructions et and yesterday David posted a long tweet:

The EDUtalk project launches with a brief Flashmeeting on Monday at 8.30pm. Following on from the success of SLFtalk, EDUtalk is a space for educators to publish digital audio content via mobile devices. DM me or @johnjohnston for the Flashmeeting URL and please follow @EDUtalkr

So it looks like we are ready to. The idea follows the SLFtalk pattern, folk can record and send audio by a variety of methods to the site; audioBoo, gabcast, mailing mp3s direct from a phone or iPhone. Instructions are on the site, liked from the sidebar. This time we have added Skype recordings with Pamela into the mix and ipadio. Quite a few people asked for ipadio support in SLFtalk but it was not possible at that time.

Last week I did a bit of testing with ipadio and found it didn’t have a RSS feed for specific tags (this is how we push audioBoo onto the site), but I did get a nice welcome email for ipdaio. I replied to this suggesting the feature, and within a day or two the developers had added it! You can now record an ipadio phlog tag it EDUtalk and it will turn up on EDUtalk.cc. As with posterous helping out by adding to their API I continue to be very pleasantly surprised with how developers provide us with free products and then alter them on request.

I am very excited about the project, listening to the audio from SLFtalk provided a different dimension to reading blogs or watch video recordings. I hope other people are too. Anyone interested is invited to the flashmeeting (Just DM me or David for a link) and to start submitting audio next week you ght even win a prize. 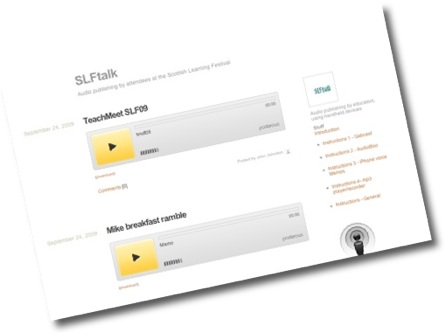