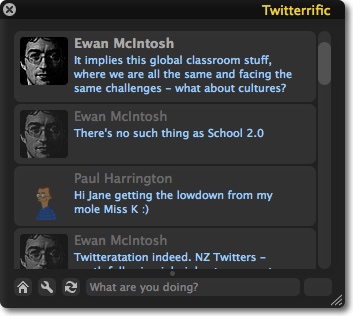 Somewhat unbelievably, I am watching Ewan give a presentation via twitter!

He is at ULearn07 giving a Keynote.

There’s no such thing as School 2.0
It implies this global classroom stuff, where we are all the same and facing the same challenges – what about cultures?

Careers 2.0: the global microbrand. Anyone with a blog can become an employer and entrepreneur. No cost, no risk, nothing to lose

Career 2.0 or Exploitation 2.0: we need to educate the process, too or this happens: Ogre to Slay? Outsource It to Chinese – New York Times

Weirdest live blog I’ve ever done, maybe I do not need to leave the couch ever again. I am not sure if i know what Helen Baxter was talking about, but I got interesting stuff through Ewan‘s and Paul‘s twits, Paul seems to be linked up to some NZ twitters. Tweets keep everyting short and sweet, perfect for sound-bite nation or media snackers.

I think you could use twitter and some scripting to present, forget powerpoint, maybe filter tweets through some css to fill up a screen.