A day late for the last day of blogvember.

I’m posting this again because I find it deeply troubling; a buried paragraph in Con manifesto basically saying if they win they have a blank cheque to change EVERYTHING. Mustn’t happen. Why is no one challenging them on what this paragraph means? pic.twitter.com/OqiZZTXV5j

I don’t own a lot of shoes but I think a lot about the ones I have. It takes me even longer to buy a pair that to get a new frying pan.

Recently I’ve had trouble getting walking boots to suit. All the ones in my price range seem to have gone to whole sizes only. The Brashers I bought repeatedly have gone, bought over and changed shape.

Here is what my brashers looked like a few years ago when I noted: 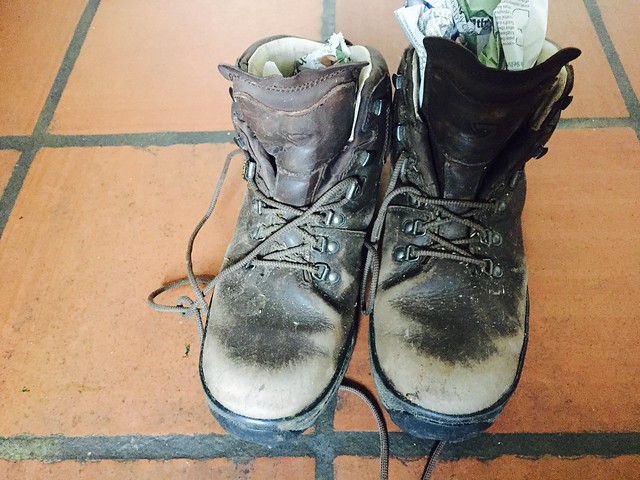 I now wish I had polished those ones a bit more.

I’d guess one of the biggest changes in my lifetime is the increasing amount and complexity of infrastructure.
Everything we depend in turn depends on many other things and connection, and so on, leaving us even more powerless or ignorant.
When I was young the journey of milk from farm to jug was fairly simple: farm, local dairy, milk van to doorstep. The cream floated on the top. I think of this as a metaphor for almost everything.

I’ve eaten a fair bit of toast in my life. Until I was 21 and stopped eating meat I think I had toast and bacon for breakfast most days. After that I moved on to toast and marmalade, preferably Frank Cooper’s oxford.
My tooth has got a little less sweet and in the last 10 years I’ve moved on to muesli and yoghurt most mornings. I still like toast. At school the pupils can get toast at morning break time and I usually grab a slice. I often have some with peanut butter when I get home from work. Weekend mornings I’ll have toast and egg or french toast from breakfast.

Until I had a cholesterol test I had a strong preference for butter, now I seem habituated to margarine.

I like a few other things toasted too, scones for one.

Thinking of toast I remembered a lyric, ‘a little piece of toast’ which lead to a song from when I was 20 Streetband – Toast

Sport – #blogvember 22 I was hoping that some inspiration would strike for today’s challenge. No such luck.

#blogvember 20 – fight – One of the nicest fights I’ve been in was GIF FIGHT!! a small irregular jpg challenge posted to be turned into gifs that started about 2013.

At the theatre tonight to watch the Richard Alston company dance. Turns out the music to one piece, some Monteverdi madrigals, were a revelation. I would. Ever describe myself as a music lover but this…

#blogvember 19 – party – it has been years since I’ve been to a party. I can’t say l miss the experience.

My favourite animal is the field vole. A tiny, fascinating creature. As a boy I kept a few as pets. You don’t see them often but they are one of our more common mammals. You can see sign of them easily, their tunnels through the grass have neat pile of green droppings and cut grass. The skeletons and skulls are often in owl pellets. Like other rodents their front teeth keep growing, like elephants their distinctive zig zag back teeth do too. They have a lemming like fluctuations in their numbers. They are also pretty cute looking.

I must say I’ve been struggling to keep up with blogvember this week. I’ve been busy, when I saw renovation as a topic I almost gave up. I then remembered the modernest slogan “Make it New” that came from Ezra Pound, with a vague recollection that this originated from a Chinese text. Off to duckduckgo which took me to The Making of “Make It New” – Guernica

If you can one day renovate yourself, do so from day to day. Yea, let there be daily renovation. (Legge’s English)

The whole message web page is fascinating, the way Pound renovates this historical phrase and the way it spread. Well worth reading, so I am glad that blogvember is renovation my bloggign & reading.