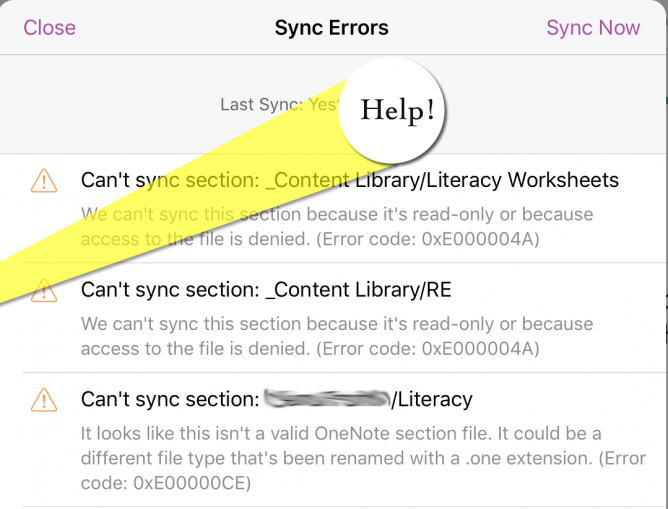 I am looking from help on this one. Perhaps from one of the many #MSIEExpert folk on twitter.

This post has been updated several times since posted. We didn’t get a complete fix, but have stopped the errors, documented further down.

After having syncing problems with using the Word iOS app I switched to using a OneNote Class notebook for some distribution and collection of ‘work’.

Most of it has been very lightweight, text in the main.

I work on a Desktop iMac using OS 10.11 the OS and OneNote app are kept up to date. The pupils iOs version of OneNote is kept updated too.

The workflow is I create a page, in the teachers only or content library and use the Class Notebook distribute page facility to send the pages to pupils. The pupils can add text, occasionally edit inserted documents and I should be able to see the changes on my mac or iPad.

This mostly works, but first one then another pupil began to get sync errors. Despite repeated attempts to sync, logging on and off again these error persist. I’ve now got 2 out of 13 pupils where the workflow fails.

The error messages do not all seem to make much sense:

It looks like this isn’t a valid OneNote section file. It could be a different file type thats been renamed with a .one extension. (Error code: OxEOOOOOCE)

Since we don’t have access to the files either on the mac or the iPads this seem particularly unlikely.

Can’t sync section: _Content Library,’Literacy Worksheets We can’t sync this section because it’s read-only or because access to the file is denied. [Error code: OxE000004A)

I am left wondering what do to? Should I remove the pupils and add them again? Should I delete the problematic sections? (I’ve emailed onenoteedu@microsoft.com but only had a robot response so far.)

For such a basic piece of classroom practise, worksheet distribution and jotter work, I can’t really have something that fails so frequently (like losing a couple of pupils jotters).

Any ideas gratefully accepted, drop them in the comments.

Update: getting a fair number of suggestions and me toos on twitter. These from Sarah clark (@Sfm36)

I am finding lots of sync errors with iPad at the moment. Can copy the page and delete corrupted section (1/2)

(2/2) then can try closing notebook and opening again

have you deleted history?

I’ve not done that. I’ve not strayed from standard use at all.

The twitter thread is getting to be a bit of a mess with other problems crossing in so:

I’ve not done that. And note that I created the notebook through Glow in the Class Notebook app. Since then I’ve mostly edited on mac.

Mark McShane (@mmcshane) has lots of OneNote & OneDrive problems too.

the business with Share-point sites/OneDrive/ondriveforbusiness is a mess. I think that, tied with Glow/SharePoint, is problem

Mike Tholfsen suggested that I send an email to classnotebook@onenote.uservoice.com? I’ve done that and await any reply.

At some point Sarah asked have you deleted history?

After a bit of poking around I found history on the desktop OneNote app, but nothing to delete there.

Another possibility – you’re using a new computer / device and whole notebook hasn’t had time to sync.

But I’ve been using this Class NoteBook on and off for weeks.

I am guessing that the best thing to do is to copy and then delete some of the problematic sections.

My worry is that some of the sections are shared in the content Library and some are sections on Pupil’s sections. If I delete the Literacy sub-section 1 on the two pupils sections that are giving problems will I be able to distribute work to the new Literacy sections I create there? Are these sections just identified by name or something hidden, an id of some sort?

On the mac/iOS versions of OneNote there is a lot of smoke & mirrors. Ian Stuart, a OneNote expert, has explined to me that you can get direct access to OneNote files in the full windows version. This would explain and hint at a fix for the It looks like this isn’t a valid OneNote section file. It could be a different file type thats been renamed with a .one extension problems.

There does seem to be a fair bit of this sort of problem about, I’ve heard elsewhere of problems with windows versions too, content being lost, syncs failing. The concept behind OneNote (as explained by Ian), would seem wonderful. In its original Windows version it seems to have been rock solid for years. The app gains features and updates very quickly indeed, but I wonder if this is at the expense of reliability and fixing existing bugs?

My class has invested a fair bit of time in the system, it take youngsters a wee bit of time to get familiar with workflow and systems. I am now wondering if I should look at something else next session.

Many thanks t othe folk who offered help on Twitter yesterday, ver much appreciated.

I’ve had some suggestions from Mike Tholfsen, which involve getting problematic pupils to log out, force quit app and log in and sync again, (Leaving oneNote open, plugging device in and turning off screen lock overnight). We have done that with one app, adding a complete deletion of the app and reinstall. I await overnight results.

I also got one of the pupils who is having trouble to use an iPad that has never had OneNote installed on it before.  The could load the Class NoteBook and it synced, apart from the contents that had not synced up from their own iPad.

We can see a sync error there:

Hoping to find some good news on the overnight sync tomorrow.

I’ve had a fair bit of help from Microsoft both from Raymond a OneNote Education Support Engineer and via Mike Tholfsen: Yan from OneNote team and Ivan from the Class Notebook team! This is pretty amazing support for one wee classroom from a big company (I’ve missed a few folk in the cc list who deserve thanks too).

We had a variety of suggestions, mostly around trying to completely log off and restart, including leaving overnight to sync. Given the problem persisted when we move to a ‘lean’ iPad I was a bit doubtful. Both pupils continued to have sync fails after that.

One avenue we explored first was to go though the browser to onenote.com. Both pupils saw no errors there, there were a few pages they had created missing, I guess because they never got off the iPad, but all looked ok.

Finally I got the pupils to delete the app, re-install and log on again. After a short while syncing the Class NoteBook seems to be working, we tried creating a new page and that synced and I created a page on the desktop and that appeared.

There were a few pages missing but we can live with that. I am somewhat surprised that it has worked after the test of a clean setup, I can only presume that in that case we had a new problem.

We have not done much in the way of real life testing given that this is the last week of school before Christmas. Carols, nativity and parties have taken over, the only use of ICT has bee na little portfoloing and some Christmas Giffing.

Next Steps Next Year

This process has been a bit of a time sink, especially writing it up. I am not much further forward in understanding the problem and have nothing much more than hope that an update will sort things out.

There does appear to be ongoing issues with syncing across devices and from the release notes in the iOS app store there are some logging on (or having to repeatedly log on) problems too.

But the affordances of OneNote are worth giving it another shot (I don’t love the app, but the ease of distribution to pupils and review of pupil contribution is great). The main factor for me is the use of a Glow logon and the assurances of Education Scotland that security ad data checks have taken place. Setting up another system would involve a lot of work and no guarantee of success. The pupils would land on a different learning curve.

I have now got some contact with the MS folk, the app is in very active development. Certainly worth a wee bit of perseverance. I will recommend that pupils take a copy of written work in their local Notes app, before syncing. I’ll also stop and sync before the last minutes of a lesson hopefully minimising failure. I would be less confident in using the iOS/OneNote class notebook set up in a secondary if the material was exam critical.

Many thanks to all the folk who tweeted suggestions and help, most have been synced in in comments below. I appreciate the time it takes to put answers together.

1. I am not sure I am using the right terminology, there seems to be sections within sections in a Class Notebook. ↩