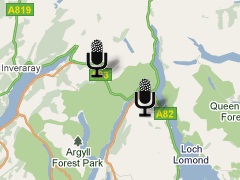 I love Audioboo. We use it as one of the ways to publish to edutalk.cc and I’ve joined in tagging some boos uksm for the UK Sound Map project.

Audioboo must be one of the simplest ways to do audio podcasting and it has many nice features. One of the ones that interests me most is the fact that the RSS feed has geo information in it, that is the location that the boo was recorded in (users can I believe turn this off). I have played about with the google maps api in simple ways (eg some walks) and really like the ability to tell a story in space as well as time.

Yesterday I though I’d have a look at the Audio Boo RSS feed (atom really) and see if I could do something similar.

Since google maps support GEORSS I though I’d give that a try first, pasting my audioboo feed into the search box on google maps give me this map which shows the boos without the audio players (no flash support).

I made a few Adjustments, I usually use magpie RSS Reader for RSS parsing, but I could not get it to work for the tag, due, I expect, to the colon. I therefore switched to the XMLParser provided by Adam A Flynn. The webpage explains that it can manage tags with dashes and colons but I am not sure how to as it is not in the docs yet (As far as I know). I just replaced georss:point with georsspoint and got on with it. The page is pretty much a mess of php and javascript but it works. I took the lazy way out to put audio players in the Google Map info bubbles, I used the html5 audio tag. That means that pre html5 browsers will not see it but this is not vital stuff. On the walk maps I’ve used an flash player so that is doable too.

I am caching the rss feed from AudioBoo so updates might not appear. It would be easy enough to set this up so that the page would load boos from a user or tag in the url /boo.php?tag=thetag or /boo.php?user=user too, but might effect my bandwidth.

The other interesting thing I found was Shadowmaker a webpage that makes shadows for google map icons which is a nice touch. On the walk maps I never got round to doing that. Shadowmaker makes it so easy that I could not avoid it.

Anyway I think this would be a really nice way to podcast a school trip, once a page like this is in place it will reflect any updates to AudioBoo. You could also make one that would map a boos that were tagged with a particular tag although I don’t think AudioBoo had feeds for tags from a particular user?

I’d love to hear from anyone with a class or school interested in a project like this and lend a hand.

If you are interested in learning about custom google maps I’d recommend the Google Maps API Tutorial.