Recently I’ve been thinking about ipod touches quite a bit. As well as giving some support to the Glencairn ipod project and being the middle man for a wee Consolarium trial of TapTale which will start soon, I am just back from Oldham and Blackpool CLC’s iPodTouch Conference.

Last weekend I started playing with an idea for a wee web app. The idea is to provide an interface for searching flickr and creating images combining flickr photos and text. Using only photos that can be adapted and incorporating attribution. 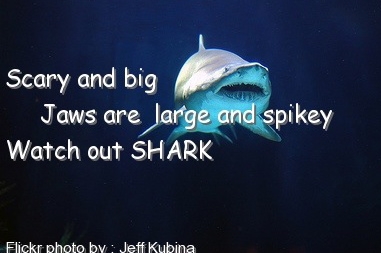 As a sort of proof of concept I made a web app that makes lunes. A Lune is a fixed-form variant haiku created for the English language. It has three words on the first line, five on the second and three on the third. I’ve used lune writing as a classroom activity on several occasions, they are simple and fun to write. (Lune (poetry) – Wikipedia, the free encyclopedia) 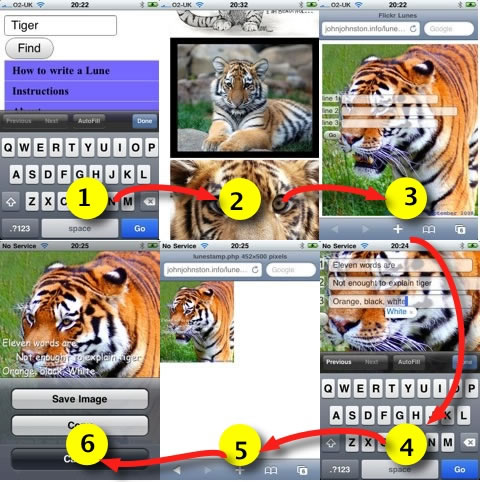 I tried the app out with the Glencairn primary six class on tuesday, we then bumped the photos to my phone, transferred them to a mac and added voice in iMovie: Animal Lunes, all in 90 minutes.

I though the app ran fairly smoothly except for quotes ’ which came back escaped with a slash ’, some text ran off the pictures and the problem with not being able to fix spelling mistakes. I should be able to fix the escapes and hopefully alter the font size to suit the picture width.

Of course the whole thing was put together in an afternoon, the code is rough and the interface rougher. The plan might be to make it a bit more ajaxy and add a few different poem types, proper haiku, kennngs, Cinquains etc. I am wondering if it would be worthwhile developing? Is it too much of a one off to be really useful? I’d love to know what you think?

You can see the webpage in a quick and dirty Lunes Simulator or directly Flickr Lunes.