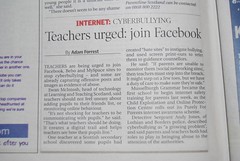 Article from The Herald on Sunday about cyberbullying. Includes recommendation that teachers should join Facebook.

I’ve had a facebook account for a wee while now and am pretty ambivalent about it. I am not really very keen on the closed nature of the network. Most of the web 2 stuff I’ve found useful (rss, blogs, flickr and I dare say twitter) are open(ish) networks, anyone can see what you have to say.

Someone, maybe Ewan, explained that facebook could be a place to get away from the openness and post more personal things that they would not like all to see, but now teachers are being asked to be ‘friends’ with pupils on social networks which would remove this personal aspect.
Personally I’d not post anything onto facebook or anywhere else that I want to keep secret.

I know facebook groups can be useful, teachmeetperth on Facebook, but in my opinion a wiki is better.

Neil has a great post Are You Going Far Enough? Or Too Far? on this area and I agree that in the case of your own children you need to discuss and reach agreement about access to their social space. Fortunately (for me) my daughter is too old for this to become a problem, I’m her friend on facebook but not on Bebo and for a 17 year old living away from home that is fine.
For pupils this is a different matter, I can’t imagine that many would be happy with teachers befriending them on their space and I don’t think I want to sneak in by faking my age or claiming to be a pupil.

Better in my opinion to:

and hope/expect that understanding and behaviour transfer to other online areas.

On the topic of facebook I did get an interesting invite the other day:

I just wonder how to accept it