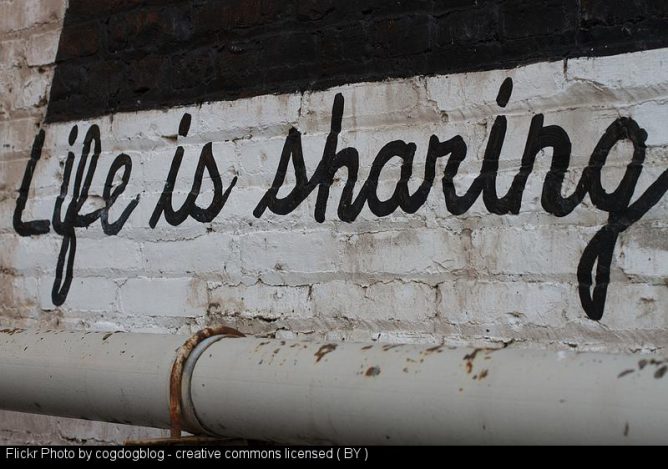 The weeks are flying by. I was hoping to backtrack on a few things this week but Week Six. Copyright, OERs and Creative Commons – 23 Things popped into my inbox and thing 11 is quite timely.

I’ve blogged here about copyright quite a bit, but it is a constantly interesting subject.

I am in general a respecter of copyright. I use other people’s images her on the blog and always attribute and respect copyright.

Occasionally for more creative purposes I sidestep the rules to use of old movie or tv footage on my DS106 blog for more fun stuff (example: characters). I don’t think any corporate dollars have been harmed;-)

I’ve had a licence on this blog for a while, originally a BY, Share Alike-Non Commercial one. Currently a Creative Commons Attribution-ShareAlike 4.0 International License.

A couple of days ago I read [Trying] Going to Flickr Zero, CC0 where Alan has changed all of his Flickr licenses to CC0. I can see the point.

My flickr photos are CC-BY-SA in the same way as this blog. This got me thinking. I am, unlike Alan, no photographer. It is unlikely anyone is going to make loads of cash from any of my images (or my deathless prose here). Over the years I’ve had a couple (2) of folk contact me to use a picture of mine for “commercial” purposes, and been delighted to do so. CC0 would change little except make reuse easier.

But I do like the idea of attribution and getting attributed. The attention feels nice. It also might encourage others…

The Share Alike idea seems nice too, but I guess might occasionally make things more difficult to use. I may lose that soon.

But not everything I create can be CC0. Not yet. And in my local context these things can really really matter. It can make the difference between who gets a job or tenure or promotion and who doesn’t.

and in the comments:

Audrey Alan and Doug are examples of intersectionality here – no stable academic job but famous and with lots of social capital.

I’ve not really got any problems in this regard, being an amateur sharer rather than a pro.

This is hard. Over the past few years I’ve had to explain copyright to teachers. Now I am back in class working with 8-11 year olds. Since I was last in the classroom full time pupils spend a lot more time on line, they are very familiar with finding images via google searches but digging out the license is hard. Lots of tools now make it very easy to ignore copyright.

I fall back on providing my class with some  public domain sites to search and my FlickrCC Stampr.