Wondering if #RadioEdutalk could be of use now.
https://edutalk.cc
If you are an educator (non-commercial) and want to broadcast audio or podcast please get in touch.

The #altc Programme : ALT Annual Conference 2019 looks amazing. I wish I could go. I will be chatting to keynote @suebecks, co-chair @scotlandlouise @mhawksey & perhaps @MarenDeepwell on Radio #Edutalk on Wednesday 10 Jul 2019 8pm

Skype just asked me to rate my call with @IaninSheffield I didn’t notice any audio glitches but may have missed then as Ian was fascinating talking about his PHD research on twitter use by teachers. If you missed it catch the archive which will be on Radio #EDUtalk soon.

Incidentally, I could almost hear the gears turning in John’s head as I’m sure he was thinking much the same thing. He carefully restrained himself and managed to keep the conversation on track though.

Thanks for the listen, it is not often I am accused of keeping things on track;-)

I’ve though about this a wee bit. Doing the whole thing via the indieweb would be beautiful but it raises the barrier for participation very high. Setting up WordPress for indieweb is certainly doable but the number of folk interested in WordPress and education that would do this would be low. Given the notion of accessibility I think this is more something to aim for long term?

I had though of the idea of running the whole thing on p2, I’ve set up a couple of short term p2 blogs for Education Scotland to go with public events. You can set p2 to allow subscribers to post and set a widget to allow self registration. In our set up this registration was limited to Glow Scotland users. This of course loses the indieweb bit. Unfortunately p2 is pretty horrible on mobile.

I hope you get a proposal together, it would be great to have an indieWeb presence virtually at the conference. I expect you would post your presentation tweets via your site. I did consider that last time when I presented but was worried about timing and appearance on twitter which I’ve not really got my head round.

“BEST. PD. EVER!” Some teachers make bold claims for the way that Twitter supports their professional development, yet research into this area is rather limited. This study sought to gain a better understanding of the practices involved and the part that Twitter plays. It uses a sociomaterial sensibility informed by actor-network theory (ANT) to unravel the complex webs of relations which form, break apart and reform when knowledge practices are enacted in the mediated arena of Twitter.
To explore this rich but messy environment, I evoke the spirit of the Parisian flâneur to develop an ethnographic approach I refer to as ‘flânography.’

Ian Guest’s phd should make for fascinating reading. I’ve followed along on his blog as best I could. The idea of twitter as CPD is a popular one that needs the sort of examination that Ian carried out.

We have interviewed Ian on Radio Edutalk about his phd back in 2016 and I am looking forward to talking to him again soon. He also published audio of some of his research interviews on Edutalk: CPDin140.

Tonight’s commute enlivened by Radio #Edutalk 20-11-2018: Keir Bloomer on empowering schools. @parlad at the controls. Always great to hear from Keir on Edutalk. I was going to pull some quotes but you should really listen. 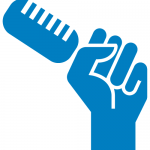 Radio EDUtalk is shaping up for the rest of the year.  If you would like to be a guest, please get in touch.