This is a quick test of a alternative way to post to my blog.

I tend to blog from my MacBook. I’ve been testing various iOS systems for blogging on the go. I’ve also read a lot about blogging systems that use Dropbox files to produce a post. In the past I’ve experimented with posting to a blog with AppleScript and thought I could knit something simple together. This consists of several parts:

When a file arrives on Dropbox and syncs to my work mac the Folder Action AppleScript posts it to my blog. It uses the first line of the file as a title. If the file is HTML it posts that, if it is markdown it converts it to HTML first.

This post was created with [NOCs](http://www.wisd.com/) on my iPhone. Once I’ve finished a local, iPhone, draft NOCs allows me to move it to any Dropbox folder.

About 6 years show I was testing posting images via the MetaWeblogApi and it should be easy enough to use a Dropbox folder for that, or to script an FTP upload. This would mean I could add an image from my phone to my Dropbox. This would upload to this sit and could be encorporated into a post. Until the I could use Flickr. 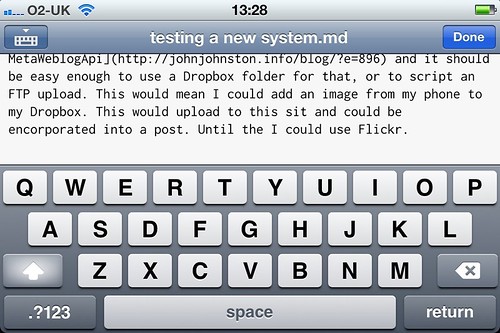 I am not sure if anyone is very interested in this sort of thing. If they are I’ll be able to post more details from a desktop. This is about as long a post as I’d like to write on a phone.

Not quite perfect yet, I had to edit the img tag here. More fun to be had.

3 thoughts on “Testing a new system”