Thanks Fearghal, huffduffed for the commute.

So pleased to rediscover huffduff-video today and find that it works with SoundCloud.

I like listening to podcasts. I usually listen to them while driving. I use instacast to play podcasts on my iPhone. Instacast allows you to subscribe to podcast feeds, it downloads episodes while you are on WiFi for playback later. I subscribe to a few educational podcast, some mac ones, the Scottish Poetry Library and Machine of Death. I change these about occasionally.

Sometimes though I want to listen to individual podcasts episodes without subscribing to the whole feed. Recently I’ve been doing this by downloading the podcast media to dropbox, making the files favourites on my phone while on WiFi(which downloads them onto the phone) and listening later. To speed this up a bit and to allow me to do this from my phone or an ipad I have a folder in my dropbox with an AppleScript Folder Action attached to the folder. I add a text file with the url to a media file to this folder (typically with droptext) and it is automatically downloaded to my desktop in a dropbox folder. I then can favourite etc as normal.

This still leaves a bit to be desired, I need to remember to favourite the files while on Wifi so that they are ready to play in the car.

Huffduffer looks like it is made to solve this problem. It is a service that allows you to create a podcast feed from episodes of different podcasts or just mp3 files found on the web. You use a bookmarklet which finds any mp3 files on the current webpage and adds them to your podcast.

Earlier this week I saw a link to huffduffer and created an account: Johnjohnston on Huffduffer. The only problem is I created the account on my phone and left it a few days to install the bookmarklet on my desktop. By then I had forgotten the password!

Attempts to reset my password failed, and perhaps because it is the weekend, requests to get this fixed have not been answered yet. It looks like a few other folk have the problem

So today I decided to try a wee bit of DIY with AppleScript. I’ve already got a few dropbox folders set up with Folder actions to do some automation 1 so had a rough idea of how to go about this.

What I want to do is, on iOS copy the url to a webpage, switch to droptext, make a new text file containing the url and save it into the folder. The Folder Action script then parses the webpage for mp3 and m4a files and adds them to a RSS file. I’ve describe to this file in instacast so don’t need to think about it much other than opening instacast when on wifi and letting it download episodes.

Google helped with a couple of tricky parts, getting the address of mp3 files out of the web page:
how to extract an mp3’s url from m3u…: Apple Support Communities and getting the correct style of date so that the RSS feed validates:
RFC 822 Dates with AppleScript | Joe Maller.

The script basically adds the mp3 urls to a text file along with the date they are added. This text file is parsed to produce an RSS feed. The script certainly lacks any polish, but it works. Here is the RSS feed in my dropbox. And here is what it looks like in
Instacast: 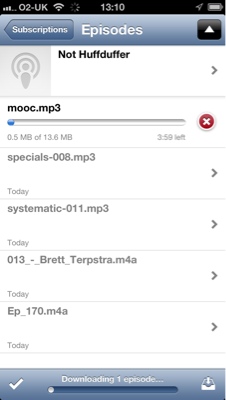 As you can see, the feed is quite minimal, the names come from the mp3 file name. The script (I’ve uploaded it here), needs lots of work. I briefly tried to get the titles from the tile of the webpage, but ran into some odd characters which threw things off. I’ve also hard coded file paths into the script and it would be better not too. Most of the script, dealing with detecting the files added is a lift form the examples that Apple ship. My bit just process the url. I’ve also adapt this to run from a mac grabbing the front url from Safari, this script is in my FastScripts folder s oI can run it with a keyboard shortcut.

Not sure if anyone is interested in this stuff here, but it fascinates me and posting it is one way of keeping track.

1. I’ve blogged a couple of other applescript/dropbox ideas OCR via dropbox with Tesseract and
Testing a new system ↩