“I wanted to add images to represent uncertainty for my Song for An Uncertain Time that I created this morning as a soundtrack to the days, so I turned to Creative Commons blend tool by @johnjohnston and it was perfect -- just enough off-balanced images ... #ds106 #clmooc https://t.co/j5za34QrJW”

Kevin, I am delighted that my wee toy could be part of making something this lovely. Thanks for the mention!

I wanted to add images to represent uncertainty for my Song for An Uncertain Time that I created this morning as a soundtrack to the days, so I turned to Creative Commons blend tool by @johnjohnston and it was perfect — just enough off-balanced images … #ds106 #clmooc pic.twitter.com/j5za34QrJW

Friday afternoon I saw this tweet: Twitter / tombarrett: “Three Interesting Ways to … from Tom Barrett and popped over to the google presentation on using your Pocket Video Camera in the Classroom. At that point there were three ways and a few folk in the chat. I got an invite from Tom and when I got home I added a slide, by that time there were four ideas so mine made five, I added another later in the evening. By this morning there are nineteen ideas in the slide deck and there have always been a few folk viewing the presentation when I’ve checked it. As I get ready to post this there are 21 ideas. There has also be a ton of tweets linking to the presentation.

Tom has a wonderful ability to get these things rolling through his extensive twitter network. The shared google presentation idea is a great idea, Tom has used it before: Thirty-Eight Interesting Ways (and tips) to use your Interactive Whiteboard and a couple on google earth, as has Doug Belshaw with Interesting Ways to use Netbooks in the Classroom.

What is about these efforts is the amount of collaboration that they attract, much more tha, for example my own efforts. I think part of the secret is probably the low bar to add to the resource. I guess it took me about 2 or 3 minutes to add the first of my slides and about 90 seconds for the second. This is a lot more reasonable than expecting folk to create a wiki page and fill it up. Google Slides are pretty straightforward, no need to read the docs, the technology is pretty transparent. The other part of the secret is, of course, Tom’s excellent use of twitter and the respect he has earned from educators around the world, I can’t wait for his next idea.

I’ve run a couple of short term collaborative poetry blogs this session. The first was part of the The Sandaig McClure Connection: Solutions – A poetry conversation. I played around a bit with the blog template so that comments became part of the poem. Comments were displayed inline and the link to add a comment became ‘add line’. The comment form was simplified by removing the email and url fields. An entry would look like this (slightly reduced): 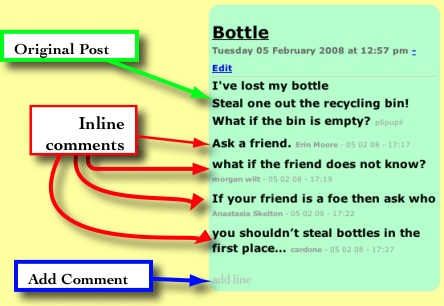 At the time I was reasonably pleased with this solution although the whole page layout started to look a bit odd as the poems began varying in length.

Last week we were working on the On the street where you live – An International Poetry Project I kept the blog in a fairly straightforward shape, except for the addition of the (stars) and (wishes) to the emoticons (that works in most of the Sandaig blogs) to help the children assess each other work. The idea with this blog was that the children would use 2 stars and a wish to offer feedback to the children on the other side of the atlantic. (In the event the US students didn’t get to commenting on our work, which might have been due to communication failures between myself and the us organisers).

The problem with using a traditional blog layout became apparent as the number of posts grew very quickly, pushing poem off the front page (which I increased to 30 poems/posts). With hindsight it might have been better to only have the last poem on the blog front-page with a list of all the poems on the side or scattered around. Or maybe no poems just boxes with titles which would open entries in a lighbox/thickbox style when clicked?

With the increase in the number of primary school blogs I’ve noticed a big drop in the comments on on main blog, perhaps due to that blog becoming routine and neglected to some extent. I’ve also not found the time to get the children reading and commenting on other blogs something else I hope to remedy next session.

So I hope to be doing more of these sort of arranged commenting blogs in the future, where there is a fairly intense burst of activity on the blog over a short period. I think this calls for a different sort of organisation and layout, I am just not sure what yet.

Pivot which we use for blogging here is a lot easier for an amateur to mess about with layout and organisation than some of the more popular blogs, its simple template tags allow you to create templates for posts, pages etc with a wee bit of html and css knowledge.
I’ve not seen any other school blogs that have altered the shape of a blog to suit purpose in this way and I’d be interested in any ideas for making these sort of blogs more accessible, interesting and attractive, if you have ideas and examples please let me know.