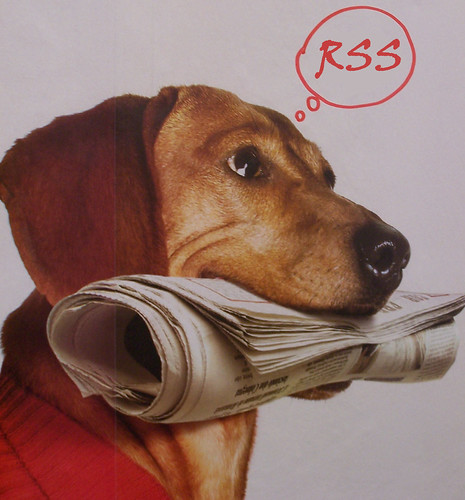 Over the last few days I’ve been reading a lot of blog posts about the passing of Google Reader. Although it has been apparent for a while that google was not really interested in reader I was very upset to hear this. Google Reader has become central to my use of the Internet.

RSS stands for, in one interpretation, for Really Simple Syndication.  This is the definition that describes it use to me. The power comes from the simplicity. RSS give you a way to read a sequential website; blog, YouTube users activity, Flickr stream, delicious links and many more is a standard format that is simple to read. This allows you to display the latest posts of one blog on another, aggregate videos from YouTube with a particular tag with blog post, delicious links etc all in the one place.

It also allows developers to create Feed Readers that will list and organise multiple blogs allowing you to read them in the one place and keep track of what you have read. Most readers will also allow you to export or share information with ease to a vast array of different services.

I first stared using RSS not long after I got my own mac and became interested in ict. In those dialup days I got new software from magazine cover disks and I installed NetNewsWire light a desktop aggregator. This I used on and off but did not really pay much attention until the first flowering of educational blogging in Scotland and the birth of TeachMeet. It then became fairly obvious that you could pull in valuable information about events to one place automatically. At that time  Technorati did a pretty good job of aggregating blogs posts, you could pull together delicious links, Flickr photos and posts with the same tag, say teachmeet06, with a pretty minimal knowledge of php. You could also do the same thing with various online aggregators, netvibes for example, with a bit less hassle or fun.

One of the features of Feed Readers that I didn’t get at first was the ability to sync your reading. I only read RSS feeds on my home computer, I only owned one device. It was not useful to me.

With the rise of mobile computing and my first iPhone the ability to sync became very useful to me. On the train I could pull out my phone and skim through my feeds, I didn’t do a lot of reading of long posts but marked, linked, instapapered, and even emailed then for later consumption.

Around this time google reader became the syncing solution of choice for the vast majority of Feed readers both desktop and mobile. This made a lot of sense; no matter where I read my feeds, on any device and on different applications on the same device everything was kept in sync. This made it easy to test a variety of applications, catch up on the web on any computer all with the help of Google Reader.

All your Eggs belong to Google

The obvious flaw in the ointment. Like posterous, you get what you pay for. Some folk argue the google did RSS and us a disservice, we did not see development of different solutions as it is hard to compete against free.

Quite a few folk reacted to google reade going way with so what:

Dave Winer who had a lot to do with the creation of RSS famously does not like readers, preferring a river of news, tabs.mediahackers.org. There are lot of good things about a stream of new, Dave’s solution is self hosted, Dropbox even, so does not relay on google or anyone else. I’ve set it up a few times, I guess it would be better for someone who reads their feeds regularly, throughout the day, as part of their job. I think reading lots of blogs is good for me professionally but do it in my own (usually breakfast on an iPad) time.

Similarly many people get links from twitter, this for me is a bit haphazard, I also mostly follow education folk on twitter, my feed reader has a wider range of odd blogs which can be useful.

Many folk are suggesting that google has shut reader down in part to encourage the use of google plus. I have a problem with this. As it stands google plus is hard to share out of. In most of the RSS readers I use it is simple to favourite a post, share it to many other services, bookmark it etc. Google plus does not help with this. I recently found that ‘plus oneing’  other folks google plus posts in google plus communities does not save that any where I can find it! I can’t see a way to share or bookmark links to google plus content with any sort of ease. There is not feed or API in google plus that allows me to extract and auto share content. I am beginning to see G+ as a longer twitter with even more opaque content.

There are a plethora of solutions being thrown up in response to google reader shutting down. This is what I’d like to see:

I guess there will be plenty of activity around replacing and improving on Google Reader over the next few months. I am looking forward to doing some testing of the different applications and systems and finding out what fits for me.

What I’ve been reading (mostly on Google reader)