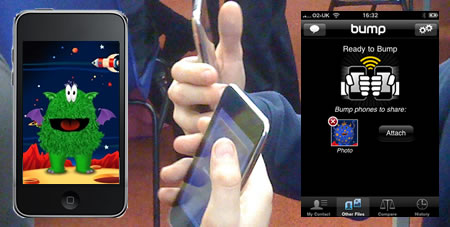 I’ve just organised (in a loose sense) an iPod touch pilot at Glencairn Primary School. At the North Lanarkshire ICT & Technical Services Centre we have an an ICT Box Scheme – Hi-Tech Kit on Short Term Loan and had originally got 22 iPod touches as part of the scheme. Although schools regularly borrow the other kit on the page no one had asked for the touches, so we decide to do a slightly more formal pilot and asked for classes to volunteer. We wanted a primary class with ? 20 pupils so that the children could feel some sort of ownership for the devices. We had a few volunteers and drew Glencairn out of the hat. The pilot will run from now until Summer.

The ipods all sync onto one mac and the idea is that we will not add any more apps and the children will not be able to update the ipods, they will be able to transfer images to classroom computers. I was surprised that this allows you to buy apps and add them to all of the ipods.

On Friday I visited the school and handed over the touches to the pupils. I was surprised at how many of them had touches at home, over half a dozen out of 19. We went through some stuff to introduce the children to the the basics. I used a document camera to project one touch to the class smartboard and that seemed to work fine. After we let the pupils explore the ipods and play with a couple of games we introduced some apps. We typed a sentence into the notes app and figured out how to copy and paste. Next we checked out the Calculator and Dictionaries. Then we created Martians with the Make a Martian app and use Bump to share them between phones.

The classroom has an airport base station (one of the older grey ones) and I was please at how quickly the children could exchange images using bump over wifi. I hope this can become the basis for some collaborative work, groups collecting images or screenshots annotating them with Comic Touch Lite and bumping them. eventually they may be able to use some sort of slideshow app to put the images together.

The possibilities for using the touches seem endless and we explained to the children that they were more likely to see how to use the touches to help their learning as we were.

The hour and a bit I had in the class went by far to quickly and i feel a wee bit of jealousy for Ms Moonie.

We have started a blog Glencairn iPod for the class to report their adventures and assess the devices and I’ll have to go back in a couple of weeks to explain how that will work (that is my excuse anyway).