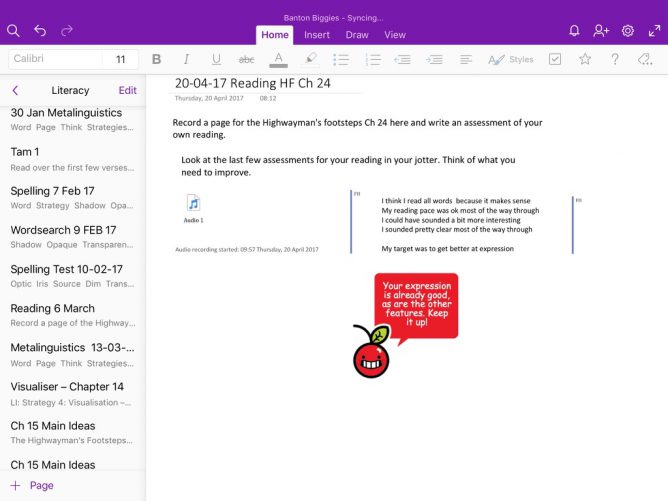 I am lucky enough to be teaching in a 1–2–1 classroom. 15 pupils spread across primaries five, six and seven.

I’ve probably not done as much with the iPads as I could have this session, stepping back into the classroom after a few years out has been ‘interesting’, teaching a multi-composite has had it challenges too.

The last time I was in school the classrooms had 2 desktop PCs, we shared a lab of desktops and a trolley of laptop. This was a great provision, but 1–2–1 is quite different.

The iPads are original Airs. They have individual ‘school’ iCloud accounts and the pupils use their glow accounts for emails, online storage (O365) etc.

Apps are distributed via a free meraki MDM account. The devices are not in DEP. I ask pupils to request app that they want. And not to install them themselves. Obviously they could if they wanted to. We have a few restrictions, movie age for example, set from meraki but the devices are pretty open.

Some brief notes on the main apps we have used this session.

If I was limited to the number of apps I think we could have got by with stock software, Safari, Notes and Photos will get you a long way. I’d add iMovie next.

The app I’d like to find is the simplest audio recorder that would allow pupils to listen to, record and share audio. It is a pity that Apple voice memos is limited to the iPhone. We have used boss jock junior a bit this session, but I think I’ll try the free version of ferrite next, unless I find something simpler.

Attempts to distribute, gather and organise.

Over the session I’ve used OneDrive, OneNote and latterly experimented with Apple Classroom. These all have their strengths and weaknesses.

Pupils creating documents in OneDrive and sharing with me was the way we started. The obvious problem is organisation. We tried both sharing documents through OneDrive and emailing back and forward. Emailing proved to be the most successful, we had a lot more failures with sharing, as noted above, it’s hard to tell if these are problems with the syncing, pilot error or due to lack of bandwidth. Emailing brings organisation problems.

The main app I’ve used this session for distributing and collecting information has been OneNote. Apart from a few dislikes of the way the software works, no grouping in particular, the concept of how OneNote should work is great. Unfortunately We’ve lost data, had slow syncing and a lot of errors thrown. Even when working with a small group of 10 pupils, getting work to review back from all of them in a timely fashion has been a struggle. We have quite often lost work completely.

The possibilities of the class notebook are wonderful. Pupils record and assess their own reading on the one page. I can use the classnote book tools to click through them all listing and adding my 2 pence worth easily. I can had out maths ‘worksheets’ with a video of myself working through the problem embedded. The pupils work can organised and accessed easily. Unfortunately it doesn’t always work for us.

Recently I took the iPads out of meraki management to allow us to test the Apple Classroom app. The best practise for doing this is to have the iPads in DEP, The Device Enrollment Program, and supervised in an MDM (e.g. meraki). Unfortunately our iPads are not in DEP and they would have to be wiped to do that. I am not doing that at this stage in the session.

Instead I got the pupils to remove the MDM management and join a manually created classroom. Compared to the onenote workflows described above the classroom is quite limited. There is no organisation of media, text etc. The killer feature, for me, is that sharing is done locally, via Airdrop, without needing to get data out to the internet. So far I’ve just used it to distribute and collect files, notes and media files of all sorts. This is lightning quick, and so far I’ve had no problems. Longer term I need to figure out how pupils work could be organised, both on their iPads and mine. Notes has a simple folder system, but it could get pretty messy over time. I wonder if iOS 11 out this autumn will help, either with improvements to the Notes app or the new Files app that integrates with OneDrive?

There is a lot to think about. I avoided the Microsoft classroom this session, it felt a bit too complex for me and seemed to still be evolving. Quite glad as MS classroom is going to be replaced by Teams. I am wondering it if will be any more successful than OneNote in my situation.

Next session Glow will also give use access to the Google suite, I’ll be interested in seeing how that plays out. My personal use of google apps has lead me to feel that they are lighter weight and faster to sync than O365 but I’ve not used them in the classroom.

I am also, now they are all free, thinking that switching to the Apple ‘office’ apps would be a good idea. I certainly find pages and keynote easier to use on iOS than Word or PowerPoint. 7

I am tempted too by Apple classroom, the quick local transfer seems like a good idea.
From the distribution to pupils, just using the notes app with the classroom Airdrop, where you can send to the whole class or a group is a great improvement over OneNote. On iOS or mac the OneNote classroom lacks the ability to send to groups which Apple Classroom has. The success and speed of Airdrop beats O365 via the web hands down (not surprising). Tables I’ve missed a little and it would be nice to be able to record audio straight into notes. It is simple enough to record in another app and insert into notes.

Ideally I’d love the simplicity and speed of Notes and Airdrop to be extended to add some of the organisational features on OneNote classroom.

I am a bit disappointed that I’ll start next session still unsure about the best way forward. Google will not arrive in Glow until September. MS teams is not yet ready for use.

I am looking forward to trying all of this out, but mindful that swapping out workflows is not as easy for our digital natives 8 as it is for me.