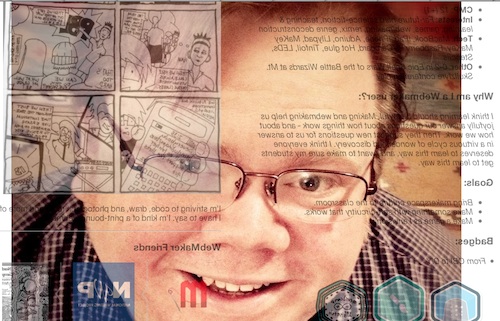 Week two of the teachtheweb mooc starts with a challange: Explore the awesome makes from last week, choose one, and remix it.. At lunch today I though I’d take a very quick stab at this using Chad’s Webmaker Profile, as Chad is a fellow ds106er and I though he would enjoy the play.

Given I was on my lunch break, I though I’d just flip the profile: Chad’s Webmaker Profile. I went to Chad’s original profile and added edit after the url, this opened thimble for me to edit his profile. I know that you can flip, turn and rotate elements of a webpage via the css transform. A quick google and I came up with:
transform: rotateY(0.5turn);-webkit-transform:rotateY(180deg);
This rotates content 180 degrees around the y axis. I added it to the css section in thimble, changing this:

I think you need to use both transform: rotateY(0.5turn) and -webkit-transform:rotateY(180deg) to get cross browser support, but I might be wrong.

Quite please with 3 minutes work I posted to the G+ Community.

Between a comment and an image I made for ds106 a while back, I started thinking about the page being a view out of the computer, so it should be looking at Chad:Chad’s Webmaker Profile.

On this edit, I’ve added Chad’s photo, hotlinked from his g+ images as a background image. All this took was adding a wee bit nmore css to the body:

In the bloc above I’ve shortened the url, I used the full url to the image. The code first adds the iamge as a background to the page, ensures it does not repeat, fixes the position to the window and lastly centres it.

What is probably irritating for my fellow MOOCers is that I am posting these and as I post geting more ideas, this means a lot of space is taken up on the G+ group.

As I post the last one, I irritate myself as the background picture does not fill the screen. Google again and I get this:

All 4 lines do the same thing for different browsers.

I also notice a new post with an audio mashup, this reminds me of Freesound where I find: Freesound.org – “computer-noise_desktop_quadcore_2009.wav” by matucha, I know Freesound supply low quality mp3 and ogg files so add an audio tag to my page, just after the body tag:

As I don’t have any controls in the tag, the player does not show, but autoplay gets it going when the page loads.

Finally I remember that Chad suggested a gif, so I download his image and make a gif of him rolling his eyes. Upload that to google and hotlink instead of the original jpg as a background. finally I have: Here’s iterating at you, Chad, I had to save twice as I needed to attribute the audio which is share under a Creative Commons — Attribution 3.0 Unported — CC BY 3.0 license.

So here is the Final version:

Here’s iterating at you, Chad.

So like a lot of the things that I do for fun, this sort of bumbled along with one shot leading to the next. What was great about doing this inside the #teachtheweb community was there were lots of ideas to bounce off. This blog post was started after a comment on the final link I posted. Does that make this connected learning?

One of the lovely things about html is, if you know sometinhg is possible the method is just a quick google away. I wonder if that makes web editing a more accessable way of encouraging creativity?

I’ve made between 6 and 10 experiments with Mozilla Thimble now, which makes me an expert

I’ve found it a wee bit slow on older computers, so I’d think about that before using it in a class.

The split screen view is really good for seeing the changes made to the code take effect. I would however like the option of a tabbed screen so that I could see the whole of the preview without needing a huge screen. I’d also like the forthcoming ability to re-edit a page rather than having to save with a new url. The trail of urls is good for reviewing the process and blogging about it.

I would also like thimble to keep a track of my creations, I am pretty sure I’ve lost track of a few.

The most powerful features of thimble are, for me the templates which have great comments and the way you can easily edit someone else’s creation.