Make a comic-strip style set of instructions for a practical task. The task you choose is entirely up to you. It could be something that relates to your subject area, or alternatively you can do something more generic like starting up and shutting down a computer, how to set an alarm clock, or how to use the office photocopier.

I’ve always liked making comics both with with pupils and for myself, a few years ago I made this set for my daughter when she went to university: Recipe Comics – a set on Flickr.

For this assignment I decided to use ComicLife on the iPad, I’ve used ComicLife on the desktop a fair bit but not done much more with the iPad app than quickly demo it. This looked like a good opportunity. I’ve been doing a fair bit of iPad workshopping this week, and one of the things I’ve been showing teachers is some map activities. These are based on ones I’ve carried out a few times with pupils on an iPod touch. Basically taking screenshots of the maps app and using them for Maths or literacy. So the comic was made with the techniques shown by the comic. 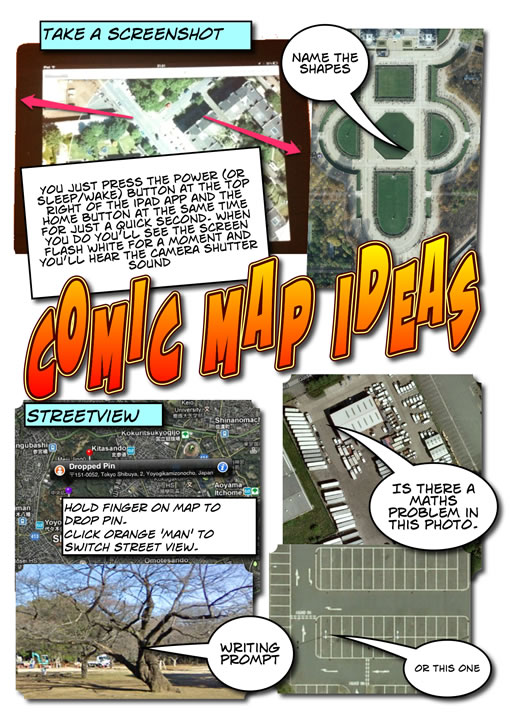 Although there has been suggested web apps for each of the edtechcc assignments I’ve used desktop applications for the first two (Fireworks, audacity) and now an iPad app. I have used web image and audio editors in the past but never found a compelling reason to use them before a desktop app other than price. I am editing this post in TextMate and will post to my blog via the MetaWeblogAPI rather than by using a browser. The problem with browser applications is with, imo, workflow and integration with other application which is not as mature as desktop or as simple as iOS. ComicLife on a mac is a good example of this, easily showing your images to ad to your comic without having to upload them. Or TextMate, here to add an image to a post I drag the image from the desktop onto the document I am typing in, it uploads it to my blog and inserts the code.

I had planned to try planning a bit with pencil and paper for this assignment after watch other folk go through the notes/mind-mapping/sketching process. But again I just got started and played about as I went along. I’ve noticed my ‘planning’, if you call it that, occurs when walking, driving or doing some other activity so I have some idea of what I am hoping for when I sit down. No excuse really and I will try a bit harder on a future assignment.

There was not much thought in this one anyway, I’ve stuck to ComicLife defaults, perhaps over familiar but they do the job I think.