This is a ‘mac’ post not really aimed at education except in so far as a lot of educationalists seem to be using Dropbox. Dropbox is of course a cloud storage & synchronisation application. Basically dropbox sets up a dropbox folder on your computer and syncs it with one online. You can set up dropbox on several computers and they are all kept in sync. This is extremely useful if you use different computers in different locations. I have my home mac, desktop at work, work laptop, iPhone and the iPad I am typing this part of the post on, all with the same files seamlessly synced. What makes drop box different is that on a computer it’s just another folder you do not need to do anything special to keep it in sync.

If you want to get a dropbox account & give me more storage on dropbox Get Dropbox.

I’ve been using drop box as a working directory for sometime now, as week as a way to view files on my phone and the iPad as well as being able to work on files at home and at work without worrying about taking them back and forward. Recently I’ve started using in a couple of slightly more sophisticated ways. 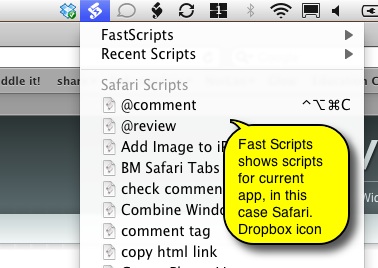 One of my favourite utilities is FastScripts, this is a menubar application that allows you quickly run AppleScripts (it also does shell and other scripts) these can be given keyboard shortcuts and are sorted into application specific lists.

Fox example I often use tiny url to shorten urls so have a script that takes the current URL from safari and puts a URL onto the clipboard. This script has a shortcut of Apple-ALT-control-U.

FastScripts list scripts stored in the Scripts folder in either the mac’s or user’s Library. Inside that folder it organises the different applications scripts inside an Application folder folders:

In this case you can see that the Applications folder is an alias. What I did was to move the applications folder to my dropbox folder, I then dragged it back, but with the command and alt keys held down. This left the folder in my dropbox but creates an alias in the Scripts folder, FastScripts sees the files in my dropbox. I can then create the alias in my other macs Scripts folder replaces the one already there. Now when I make a new script on any of the macs it is shared with the other ones and available through FastScripts.

I find that I use plain text files more and more, I write blogs posts, todo list, web pages and first drafts in TextMate. TextMate has some amazing features that are way above my head but I find it a must have application. Some of the files I use often I keep in a folder _notes in dropbox. Also in dropbox is a textMate project. A textMate project is just a easy way to see all of the files inside the _notes folder and its subfolder (power users can do a lot more with projects). 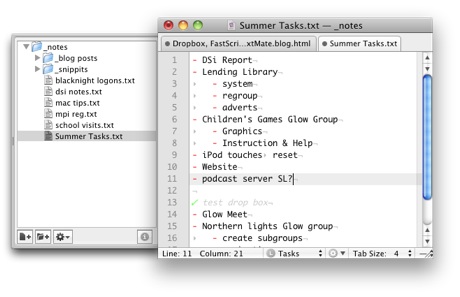 What is great is I can access and edit these files from any of the computers I use and view them through the dropbox app on an iPhone or iPad. I can also use a 59p app droptext to edit these files on the iPad.

I have never really been one for productivity systems, I’ve always like 43 Folders but mainly as a distraction. However, I do like automating repetitive tasks and things that work automagically Dropbox, FastScripts & TextMate fit that bill.