Like many education folk I follow Doug Belshaw for lots of good reasons. This week I bumped into Doug at Opening Educational Practices in Scotland Forum and launch (a lot to digest from that). Doug reminded attendees about the Survey: 5 proposals for Web Literacy Map 2.0 he is organising. After a quick review of the Web Literacy Map and other resources Doug listed I filled in the survey. This leads, backsides forward, to looking at the Map again. It is a great resource1 well organised and deep. It seems to add content every time I look at it. A couple of the questions were around the organisation and complexity of the map. I had a few thoughts. Given the complexity and depth of the resource I wonder if it would be interesting exposing it in different formats for folk to remix. Initially I though of JSON as I’ve made a couple of experiments with this in webmaker. I am now wondering if OPML might be an interesting approach too? This would export to most mind-mapping softwares. I’ve been playing with fargo occasionally and it might allow manipulation of the OPML too.

A Job for RSS

The other thing that I was reminded of was the series of chats Doug has been recording with interesting and interested parties. For the most part I’d seen these stream by on Tumblr and only listened to fragments. Doug has put the audio on the internet archive with a nice CC0 license, so I’ve done a little remixing of my own. I’ve uploaded an RSS feed to my google drive: http://tinyurl.com/dougweblit2chats so that I can pull the audio onto my phone. I can then subscribe to this feed in the podcast app on my phone and listen on the go. (I use overcast as my usually podcast app but thought it might be nice to have this as a temporary separate thing). 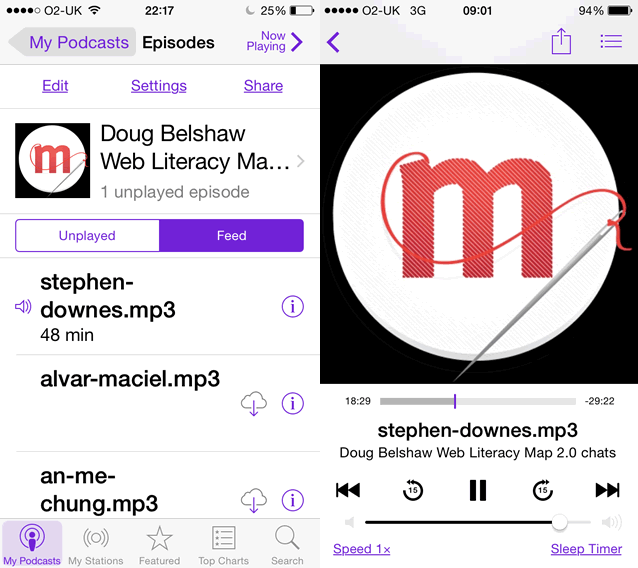 I’ve listened to the Stephen Downes episode on my commute this morning and if the rest are as interesting it will be a delight getting through them. Feel free to subscribe to the feed if you want to do the same thing, be aware I’ve made little effort to make the feed validate, the enclosures don’t have a length etc.

1. Caveat, I am not working with learners and have never taught Web literacy in any depth. I did teach some of ‘this stuff’ as part of teaching ict, blogging, podcasting and the like.

One thought on “Web Literacy Map 2.0”