Over the years I’ve been very keen on Creative Commons and using CC material in blog posts by pupils.
Pupils (and adults too) find attribution difficult.

Back in around 2008-2009 I made A flickr CC search toy aimed at pupils, to help them attribute. Later I added a feature that stamped the image with the attribution, which hopefully was easier than embed code. Later again, in 2010 I made FlickrStampr the same sort of search but squarely aimed at users of iPod Touches. At the time I believed that iPod Touches would be big in schools (Lot of ipodtouch posts here).

Both of these webpages were knocked up fairly quickly and had various modifications over the years. A couple of years back I made the iPod size one a bit more responsive so that it displayed a little better on an iPad or computer. I’ve now taken this and worked on it a bit more with the intention of replacing both of the above pages.

Earlier this year Jo Badge pointed me towards Photos For Class which is a very similar beast, except that it is built by professionals. I wonder if I inspired them?

So over the last couple of weeks I’ve been updating a new version: FlickrCC Stampr combining and improving (I hope) the two pages.

This new one will search flickr for cc images and then give you a stamped version or embed code. If this new page works out I’ll redirect the old pages to is soon.

I got boost to my interest in this playing with Alan’s flickr attribution helper: Now Three Flavors of Flickr CC Attribution Helper. I found out how to and added the code that gets all available sizes from flickr and lets you embed or stamp any particular size. 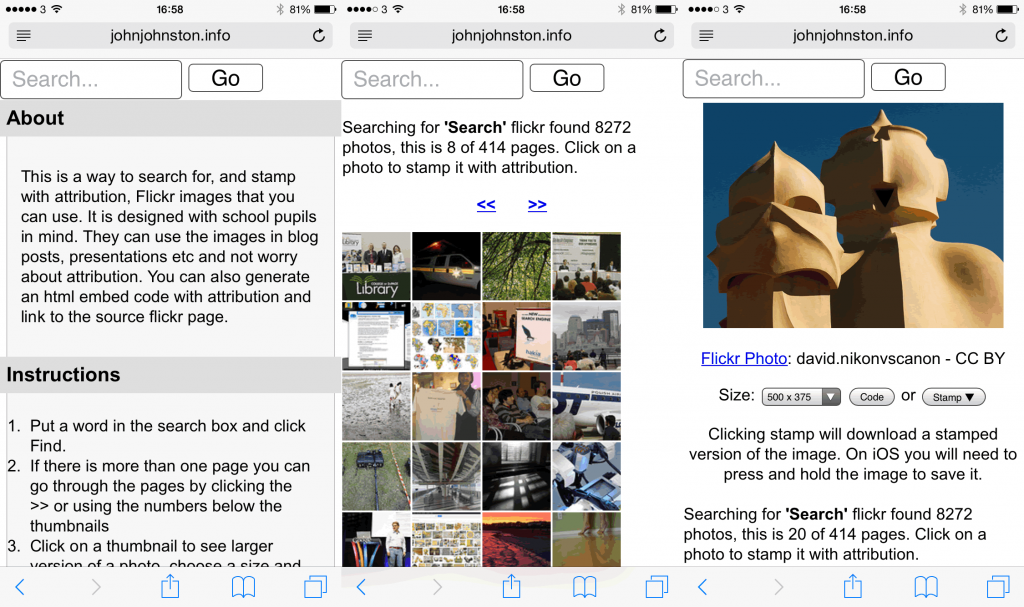 If you have an interest in this sort of thing, please give  FlickrCC Stampr a try. I’d be interested in any feedback.