Like anyone with any sense I read Alan Levine’s blog religiously. It has given me more ideas to think about and play around with than any other site on the Internet.

I was very interested in this, as I’d loved posterous until it was abandoned. One of the main things I liked about posterous was the posting by email facility. This allowed me to publish photos from my phone even with a terrible connection. I first noticed this on holiday in Galloway when I didn’t see a signal all week. I did keep my posterous updated with photos because the mail app on my phone magically seemed to be able to find a signal when I was asleep and send the photos over. I’d got it in the back of my mind to replicate this behavior with WordPress sometime, Alan’s post gave me the details of how to and the impetus to do it.

I’ve already got a reclaimhosting account for quickly setting up things to play with. It took me a quick 5 minutes to install wordPress, set the theme to the one Alan recommended (Fukasawa by Anders Norén), add the Jetpac plugin to handle mail, another plugin (Auto Thumbnailer) to automatically use images as featured images and add a css tweak. All following Alan’s instructions.

This had me covered for the main features of posterous, post via email and handling images in a pretty way.
As I wanted to post multiple images I also turned on the ‘Tiled Galleries’ and Image Galley Carousel provided by Jetpac and tweaked the CSS
a bit more for that. Another couple of minutes.

The system seems to be working just the way I wanted and yesterday I added a couple more features. Posterous had an interesting feature that allowed you to automatically forward whatever you posted to other services. I had a quick search for a WordPress plugin to do this but ended up at ifttt.com. There I found: Post WordPress Featured Image to Flickr. This just deals with the first image, but a quick test proves it works. I’ll probably explore posting all the images later.

While I was on ifttt I also notice Instagram photo to WordPress blog so have thrown this into my mix. I can now post to Instagram, have that picture added to the blog and also sent on its way to flickr. 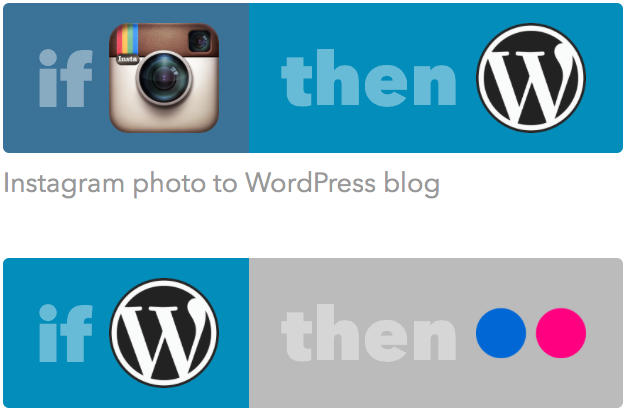 Apart for the sheer fun of doing this, it also fit in quite well with the POSSIE, own your own space agenda.

Update: forgot to add the link to the blog: Mobile Photos — From my phone via mail

3 thoughts on “Make you own SPLOT”