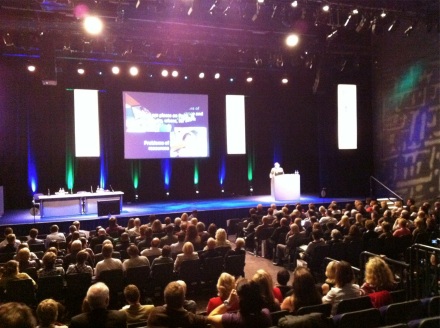 Just back from this years SLF which proved to be a interesting couple of days.

Arriving on Wednesday, I spent the morning taking a turn round the hall and the serendipitous catching up with various folk to swap information. This is one of the best parts of a large meeting although there were several regular attendees who did not show up and were missed. There was also the usual failures to see folk I was looking for or passing them with a ‘see you shortly’ which was not achieved.

I did get my usual wake up call from Nick Hood (always taking an interesting angle), and Joe Dale put up with my ‘ipod touchs are the best thing since sliced bread’ speech with patience.

I met up with David Noble for a wee bit of last minute planning of our EDUtalk presentation. This was titled:

Sharing Curriculum Change through the EDUtalk Project was a look at the EDUtalk mobile podcasting project that David and I have been running after last years successful SLFtalk. We are both pleased with the way I went. As part of the presentation we asked the audience to record and post some audio, as we did this I suddenly became rather nervous in case the audience balked, luckily they did not. A fair bit of credit should go to Doug Belshaw who immediately, in a clear voice, started interviewing his neighbours. Hopefully we got across how easy and powerful mo-blogging is and the potential it has for CPD and classroom use.

I didn’t see a lot of exciting new things but met with a few of my favourite things and folk on the floor:

Keynote fatigue and its cure

I went to a few of the keynote speeches, I find with successive SLFs I am less and less impressed with most of these, often seem to be about buzzwords wrapped in anecdotal stories and entertaining jokes. Luckily this year I went to the last one, featuring Sugata Mitra talking about his “Hole in the wall” experiments and more. I tweeted:

but islayian said it best:

amd David Muir live blogged it: The Hole In The Wall: Self Organising Systems in Education. I left keynote with lots of interesting questions running round my head. I’ve not watched Sugata Mitra on TED.com but will soon and would recommend anyone who didn’t see the SLF presentation to follow the many links to Sugata Mitra and his work.

I’ve not mentioned TeachMeetSLF2010, again David Muir has blogged it, I will leave it for the next post. It was outstanding in many ways. I’ve started posting audio to EDUtalk tagged tmslf2010.