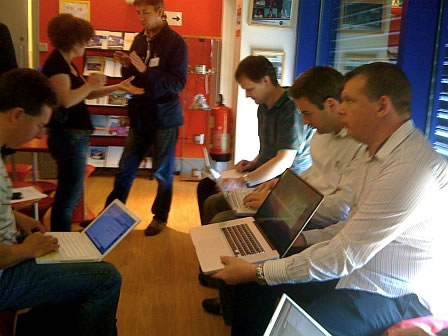 At the weekend I was down at the ADE conference in Liverpool. I drove (was driven down) on Saturday morning with Ian and Ann, colleagues from North Lan.

Saturday kicked off with an intro by Jim Elder, a side screen was displaying Adecon09 – twazzup and we were encouraged to tweet during the conference. Jim handed over to apple’s John Hickey do gave the Key Education Message from Apple. He touched on a lot of things, the challenges and changes facing Education, not surprisingly his slides were minimal and powerful/ He touched on the fact that many aspects of apple design were driven or suited to the Education market before going on to talk about he changes in Education, and the need for thinking ahead and being ready for change. The demand for skills has changes, learners now need creativity and innovation and to be able to communicate and collaborate.

John spoke about the skills and standards of young people showing a 10 year old video blogger with bags of confidence and editing skills. He spoke about how you people understand elements of video editing and demnmand a certain standard from themselves. I am not sure this holds for all the learners I know, just as a good reader may not be a writer, a consumer of film may not know or understand much about editing. Some of the tweeters were sad that books were losing out as a source of information. I was struck with the parallels with what Derek Robertson spoke about at the Scottish Learning Festival (blogged) and I am still of the opinion that there is a place for all types of communication.

After lunch we broke into ‘stage’ groups to discuss the mornings presentations and look at the ADE online community. Later in the afternoon there was the “The Golden Nugget” session, we again broke into groups and everyone had a chance to talk about some piece of tech or learning for 3 minutes, the groups voted and the best were shown to the whole conference, a light-hearted vote lead to he winner getting a new nano. My group saw some nice things, geo tagging from Adam Burt, comic life as frames for picture in picture movies, and a lovely wee tip for getting 4 frame animated gifs out of Photobooth. I talked about SLFtalk and posterous which Ian described as very interesting but completely incomprehensible, so I guess I might have gone a little quickly. The overall winner showed an iphone game SmackTalk which seemed to make a gunnipig talk:

SmackTalk! is a voice-altering app that features an animated guinea pig, puppy, kitten, and chihuahua that repeat what you say in high-pitched Squeaky voices, or low-pitched Freaky voices

I’ve been gathering links to some of the nuggets from other rooms from the twitter feed, but I hope someone in each room collected them and will share it.

Although the competition was good fun I am not sure if I like that or the splitting up of the groups to different rooms as much as all in together. I am sure I’ve missed some great ideas.

Saturday evening was dinner and karaoke, hard to speak, but I had a few interesting discussions, including one with arch geotagger Adam Burt who kindly handed me som interesting apple scripts.

On Sunday John Hickey was back on stage, now talking about Snow Leopard Server. This was really interesting, I’ve recently started using Leopard Wiki server (here and ICT & TS Podcast) and was keen to find out what was new. Quite a lot as it turns out.

Wiki Server 2 has had quite a few features added, it is now optimised for iphone/touch which fits well with the mobile anywhere/anytime learning message we are getting. The other big feature is the addition of QuickLook. If you have a mac with leopard or snow leopard you are probably used to Quicklook, select a file in the finder and hit the spacebar, you get a preview of the document, many formats are supported including MS doc, powerpoint, movie, audio, images and most apple app files. When this was announce I though it would just be some sort of lightbox effect for images, but was surprised to find out it will let users with a recent browser preview all sorts of files including MS documents even if they do not have a copy of the application need to open the file.

Podcast Producer 2, podcast producer is a server setup to process media and post it to podcasts on a wiki server in all sorts of interesting ways. It can add an introduction to movies, process media for different platforms, submit to itunes and more. Mac come with an application Podcast Capture for submitting, or recording and submitting, media to Podcast Producer. Podcast Capture now has a web version allowing Windows pcs to submit podcasts to the server.. Podcast Producer is controlled by xml workflows, I did a bit of editing and modifying these at a very simple level and struggled quite a bit. Podcast Producer 2 now comes with a Visual workflow creator, no more xml. 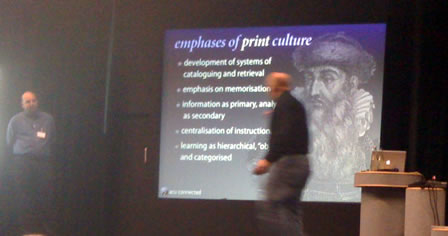 Finally we heard from Bill Rankin and George Saltsman of Abilene Christian University in Texas. They took us through some changes in learning and distribution of information, Miles Berry summarised nicely on twitter:

This was a really exciting presentation and I’ve not really started to digest all of the information of which there is a lot online: ACU Connected: Mobile Learning. I believe that the slides, which were beautiful as well as informative will be made available.

That pretty much wrapped up the conference, the major drawback being the fact that I didn’t have enough conversations, looking back over the twitter stream I realise I missed a lot of chances, next time I’ll take another body

As well as twittering I published ADE Conference photos, Ade conference 1 (audio) and ADEcon09 Sunday (audio too) on my posterous. Im using adecon09 as a tag on Delicious, hopefully others will too. I am following the tags on various services.