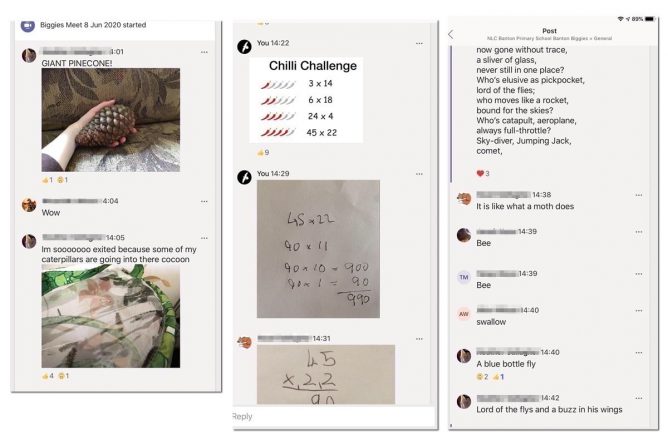 BacK to school tomorrow, ironically I had the smoothest teams meeting yet today. Relied on the chat for all display. This is how it went.

Everyone get chance to talk, some posted images at the same time into chat.

A pretty smooth, IMO, hour. Almost no time wasted waiting for pupils to see a slide. Preparation was a lot quicker too. A text file to remind me what was next and to copy text from. a folder for images, audio via Farrago.

I really hammered the size of the movie and images. Handbrake and imageoptim both multi platform, open source & free, are great tools.

I had suggested that the pupils watch the two videos before the meet, not all had but they were so short I don’t think it did anyone any harm to watch twice.

It was interesting too in the mix of audio, text and image posted to chat that the class used to join in.

I’ve not seen this rather crude method of running a meeting described but it has lead to the smoothest meeting of the nearly 30 I’ve had over the last 6 or 7 weeks.