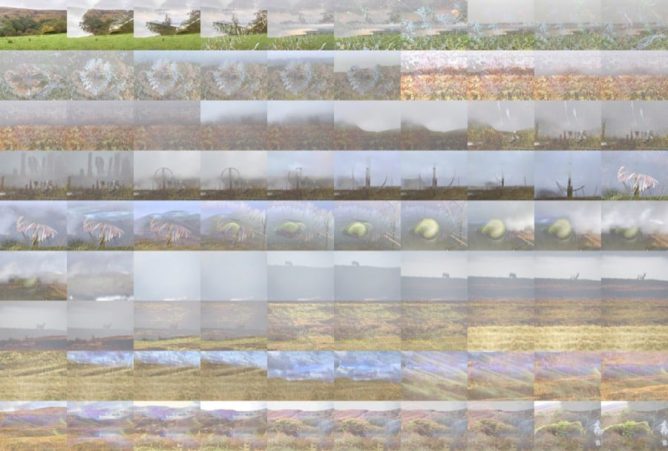 Earlier in the week I saw micro.blogger Dan Cohen’s newsletter: Humane Ingenuity 36: 15% Faster which linked to DHQ: Digital Humanities Quarterly: Deformin’ in the Rain: How (and Why) to Break a Classic Film

The article provides a pile of great gifs and distorted videos.

I’ve played around with this sort of thing before montages, gifsets and the like. Mostly DS106 inspired.

One idea I’d kept playing with is layering of images. My plan had been to layer a sequence into a movie, I’d never really got it going smoothly. I mostly just run a photo set through a script to get 1000s of images and choose a few interesting ones.

I usually use a few commandline tools for this, imagemagick & ffmpeg but there was a rather nice idea of using the StarStaX app an application for Star Trail Photography. I loaded it up with 90 odd jpgs images from a walk and merged them. I then stitched them together with ffmpeg and added some audio “Mysterious Ethereal Song” by theojt :

Not exactly a work of art but fun, I also learnt how to fade a video with ffmpeg which might be useful.

2 thoughts on “Output with fade”