I’ve been neglecting this blog again for the last wee while. Not because I’ve nothing to blog about but due to lack of time.

I’ve also been neglecting most online activity, twitter, my rss reader and am just about keeping up with email.

In a, possible vain, attempt to keep it going I though I’d post links to a couple of interesting things I’ve seen recently.

purpos/ed is a great source of ideas to think about.

We’re a non-partisan, location-independent organization aiming to kickstart a debate around the question: What’s the purpose of education? With a 3-year plan, a series of campaigns, and a weekly newsletter we aim to empower people to get involved and make a difference in their neighbourhood, area and country.

There are already a ton of thought provoking posts giving individual views of the purpose of education and I’ve not read half of the ones published so far. Coincidently as I am typing this I got a link to purpos/ed Summit for Instigators chaired by Josie Fraser this looks like a really exciting event. If you are thinking of going please consider contributing to EDUtalk  while you are there.

Another thing I missed was the Game To Learn Conference. I did see a fair bit of tweeting around the conference, Twitter / Search – #gametolearn,  and hope to catch up with some of the videos and presentations from the two days. some I have seen are #gametolearn – Playful Learning: Geocaching Workshop and a couple of prezi’s Nintendogs – Game to Learn by Anna Rossvoll on Prezi &2011-03-18 GameToLearn by Charlie Love on Prezi both of which make you want to have been at the presentation. As a side effect made me sort of see the point of prezi, always made me a bit seasick before, it fits well with gaming meme.

As well as bring invoved in Game To Learn Charlie Love had time to put together Computing Teachers? Time to wake up which has gathered a great deal of positive comment, interesting read even if you are not a computing teacher.

Other than that I’ve mostly been iOSing 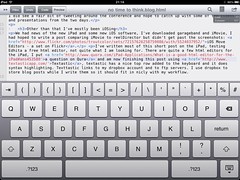 We had news of the new iPad and some new iOS software, I’ve downloaded garageband and iMovie, I had hoped to write a post comparing iMovie to reelDirector but didn’t get past the screenshots: iOS Move Editors – a set on Flickr.

I’ve written most of this short post on the iPad, testing Edhita a free html editor, not quite what I am looking for. There are quite a few html editors for the iPad, I put a question on Qura and am now finishing this post using Textastic, textastic has a nice top row added to the keyboard and it does syntax highlighting and previewing. Texttastic links to my dropbox account and to ftp servers. I use dropbox to store blog posts while I write them so it should fit in nicly with my workflow.

i hope to manage a slightly more coherent post soon but in the mean time I think I’ve managed  to put in links to far better things than i could produce.