Some great reading on the train this morning. I’ve tended to swallow whole the idea of making being one of the best ways of learning. As usually with things that you hold dearly but perhaps without a lot of analysis it is nice to read some different opinions.

The bloggers here are thinking at a much deeper level that I venture, and I recommend following the links.

I started on Hapgood.

Which linked to this:

You see critiquing isn’t a review where you let fly with your opinion, no the purpose of the critique is to make the work stronger, better, and more fitting.
Critique & Creation | Heart | Soul | Machine

Walk through a museum. Look around a city. Almost all the artifacts that we value as a society were made by or at the the order of men. But behind every one is an invisible infrastructure of labour—primarily caregiving, in its various aspects—that is mostly performed by women.
Metafoundry 15: Scribbled Leatherjackets

A quote often attributed to Gloria Steinem says: “We’ve begun to raise daughters more like sons… but few have the courage to raise our sons more like our daughters.” Maker culture, with its goal to get everyone access to the traditionally male domain of making, has focused on the first. But its success means that it further devalues the traditionally female domain of caregiving, by continuing to enforce the idea that only making things is valuable. Rather, I want to see us recognize the work of the educators, those that analyze and characterize and critique, everyone who fixes things, all the other people who do valuable work with and for others—above all, the caregivers—whose work isn’t about something you can put in a box and sell.
Why I Am Not a Maker – Atlantic Mobile

I’m always fascinated to see how my work in ed-tech is deemed “emotional” or dismissed as merely “cultural analysis” – gendered descriptions of what I do (subtly, overtly) perhaps.
Re-Building the Blog

I’ve not come to any conclusions here but it makes me think.

I got up this morning and didn’t make the bed, made some breakfast and just caught the earlier train. This let me make the walk from Waverley down to work rather than catch a bus.

Watching the scaffolders run scaffolding up a new building, helping complete the Architect’s vision, hoping to get to work in time for the barista to make me some coffee before the first meeting.

As I walked I am making this list; Wondering if a found poem is made, our national poet is called the Scots Makar; If I write a poem from the names of boats in a harbour am I a maker or curator; Artists, it seems to me, depend on other artists, critics, curators and caregivers for their making.

Finally I am thinking about DS106 Art on the couch my friend Mariana’s thoughts about learning thro critique. 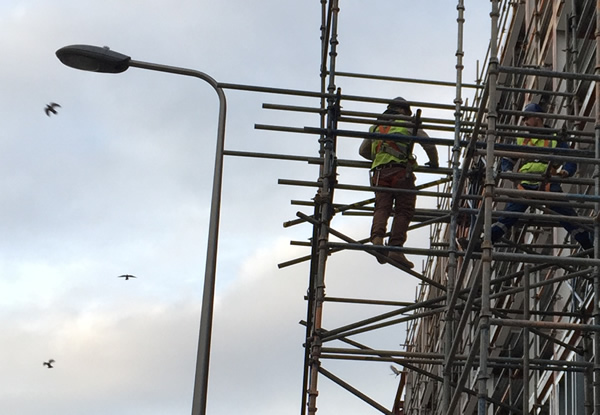 2 thoughts on “Making a Curation”