I am pretty keen on posting photos to the Internet, not because I have great interest (or any skill) in photography but as an alternative, to blogging, way of recording events. I’ve been using flickr since 2004 and am currently enjoying instagram (mine via api) and posterous

Mostly I take photos with my phone (the best camera). Recently I’ve been testing the ways apple gives you to post photos from an iOS device.

When you take photos on an iOS device or import photos from your digital camera to your computer, Photo Stream will automatically upload it so it is available on all your devices.

You can also publish photos to a public photo stream.

Here is a guide to making a public photo stream. Click to see a bigger version: 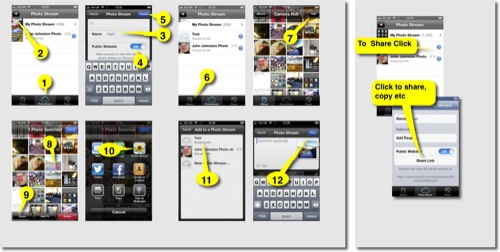 And here is the photo stream:
Ben Challum – Photo Stream. These are simple and quick to create and easy to share.

For these you ned to buy iPhoto. There are a wee bit more complex and interesting as you can include a variety of different elements, including, map, weather, notes and the like. 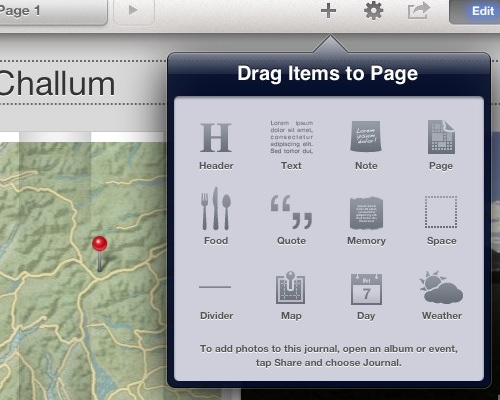 Again they are pretty straightforward to create and upload. Here are much the same photos as a journal: Ben Challum.

Here is the gallery, created on an iPad viewed in iPhoto on a iPhone 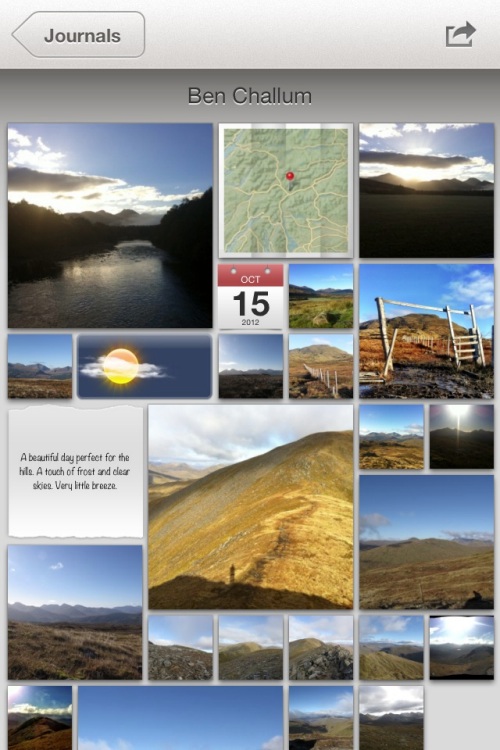 On thing I noticed with photo stream was that you could post a link, before the photos are uploaded. With iPhoto journals you have uploaded the whole journal before you can share the link. You can share a photo stream privately, although I don’t think I would. Both produce online sites with pretty horrible urls (eg: https://www.icloud.com/journal/#2;CAEQARoQpdbIWlofBmKRAh_cPbtctA;09537452-2A80-49C7-A86F-71E8734846CF!).

Photo stream is quicker, with less choice, with a journal you can edit the layout of photos easily (especially easy on an iPad). Journals have more features for telling a story by adding non photographic information. The photo stream seem to be designed to share photos as you go.

I could see the photo stream being used by a class or group to share photos and images with each other as they go allowing them to work on or use images created on classmates devices as they are created. It is simple to add images to a shared photo stream over a period.

Shared Photo Streams don’t count against your iCloud storage, and they work over Wi-Fi and cellular networks.

Apple – iCloud – photo stream. Realistically I doubt there are many cellular devices in our classrooms.

Journals are more suit to creating artefacts, perhaps using photos gather via photo stream. Journals allow the addition of text, editing of layout and look like an interesting way to tell a story, record some learning and share it, a fairly easy way to create a image heavy, attractive mini Web site.

Thus far and no further

Apart from the lengthy and un-rememberable urls the other thing I don’t like is the locked in aspect of the sharing. There is on api or RSS feed that could be used take the images and reposition them, but I suppose that is what flickr is for.

This is pretty good, it is easy from iPhoto on iOS to send images to flickr, create sets and tagging photos as they go, here are the same pictures on Flickr: Ben Challum – a set on Flickr and flickr makes it easy to repurpose the images:

Although both photo stream and journals provide slideshow views there is no way, as far as I can see, to show these elsewhere.

I still like to play with putting photos on a map: A Mapped Walk and a have a reasonable workflow that let me put that together in about 20 minutes. I also like messing with panos so here is one from the same walk:
Ben Challum Pano.