This was going to be my TeachMeet talk at the Scottish Learning festival this year, if my name had been pulled out of the virtual fruit machine.

kludge: (a badly assembled collection of parts hastily assembled to serve some particular purpose (often used to refer to computing systems or software that has been badly put together)) wordnetweb.princeton.edu/perl/webwn

The kludge refers in this case to my, fairly clunky, attempts to change some things about glow’s interface.

I’ve had a love/hate relationship with glow since I first saw it; I love the concept (What is Glow?) and hate some of the GUI and user experience. Since watching and being a little involved in glow training I hate some of the difficulties folk have doing simple things but I love seeing the inspiring work teachers and pupils have done in very a short space of time. (I saw great presentations from Marjory Murphy and Geraldine Shearer, both from North Lanarkshire, in the glowing lounge .)

Last week I was working with a primary 6 class using GarageBand to create some simple music, the idea was then to upload the pupil files to a glow group into a document library and discuss the music in a discussion forum below.

The group is a local Authority one, and the hope is that eventually pupils may comment and assess work from other classrooms and schools. 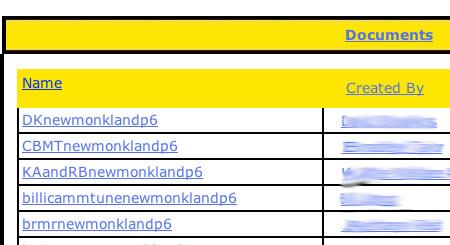 Unfortunately when the children started trying to listen to each others music, the files downloaded and opened in itunes, rather that just played in the browser. This lead to a little confusion and made it hard to move from listening, back to the browser and into a discussion.

I had been using an xml webpart at the top of the page, to make the glow page a little prettier:

So I started copying the links to the mp3 files and using dewplayer to provide a flash player. It quickly became apparent that this was going to make the page very big and the players would be separated from the discussion by the document library. It would create a lot of work for me and would not be easily for most teachers to duplicate. I really wanted to automate the process and I’ve found one way to do that.

I’ve seen and used the Anarchy Media Player on many blogs. This is a JavaScript solution for turning links to media into media players:

I though I might give it a try. I need to upload a folder full of various files to a website outside glow, as I could not get Glow to accept a JavaScript file in a document library. Once I’d done that I needed to do some simple configuration and then added this fragment to the xml webpart:

The automagically turned the document library above into this: 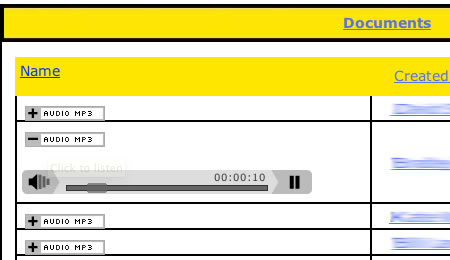 Each link to an mp3 file is changed into a flash player which plays that file.

Brief testing seems to show that this will work for .mov .flv video files too. There seems to be some browsers issues which I am testing. I’ve also tried a few experiments with the shadowbox-js media viewer and the jQuery JavaScript Library with some success, again a lot of browser testing to do. My Javascript knowledge is minimal to say the least but I had a couple of brief conversations in the glowing lounge at the Scottish Learning festival this week and was introduced to Fraser Davidson who works for RM supporting glow. He showed me some lovely stuff he has been doing with XSL to embed and beautify various feeds into glow. He also told me, if I picked it up correctly, that we could export and make available an xml webpart that already has the Javascript links and code to produce the sort of transformation of a document library I’ve been playing with. That would mean that folk would just need to add a webpart to their page to get the same sort of effect, no coding needed. I am hoping to get together with Fraser to find out more and swap ideas.

Later today I hope to attend the Glow Development Needs You! event at LTS and find out more about some alterations and enhancements of glow. It looks like there may be quiet a lot to look forward to in glow soon.