On sunday evenings I often take part in EdTechRoundUp. EdTechRoundUp is an informal group of educators, interested in talking about technology. originally planned as a planning meeting for a podcast the meet has evolved into a meeting that becomes a podcast. Planned on the edtechroundup wiki the meeting takes place in a Flash Meeting. Flashmeeting (described as the YouTube of videoconferencing) is a lovely free service for educators to hold online meetings with video, audio and chat elements.

The chats are a lot of fun and a good place to find out about many exciting uses of ICT in the classroom. Anyone cxan add to the agenda on the wiki and anyone can join in. The meetings are often chaired by Doug Belshaw who tidies up the audio for publication on EdTechRoundUp.com.

The audio is recorded not live but from a replay of the flashmeeting by volunteers. I have taken that role a couple of times and used WireTap, as I recall, wiretap pro could be used the same way as wiretap (an older free version) for free but I recently moved macs and downloaded wiretap studio. This worked fine for a couple of weeks and then I got to the end of the trial period. From the information on the WireTap Pro FAQs page I think I could download a version of pro and still use it that way but I’ve found another solution.

I missed the meeting on Sunday but got a tweet from Doug looking for someone to grab the audio. I said I’d do it and then found out that WireTap had timed out.

This is where Soundflower comes in.

Soundflower is a Mac OS X (10.2 and later) system extension that allows applications to pass audio to other applications. Soundflower is easy to use, it simply presents itself as an audio device, allowing any audio application to send and receive audio with no other support needed. Soundflower is free, open-source, and runs on Mac Intel and PPC computers.

Quick to download an install, soundflower gives you a couple more options in the Sound input and output preference pannel:

All I need to do was to set Soundflowe 2 channel as the default input and output, I then replayed the flashmeeting and used Audacity to capture the sound.
SoundFlower comes with an app Soundflowerbed (I’ve not tried it yet) and has a lot more features but this did the trick for me.

The other bit of software I used was The Levelator, once I had recorded the audio I exported it as a wav file and dropped that file onto the Levelator: 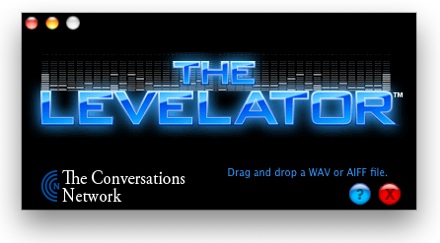 It’s software that runs on Windows, OS X (universal binary), or Linux (Ubuntu) that adjusts the audio levels within your podcast or other audio file for variations from one speaker to the next, for example. It’s not a compressor, normalizer or limiter although it contains all three.

The Levelator smoothes out the ups and downs of volume which you get form several folk talking in different places with different microphones to something that is surprisingly clear.

After that I just need to export the output from the Levelator to an mp3 and send it to Doug via dropbox. I had a listen to the audio on the way home from work yesterday and the audio sounds not too bad, the content sounds very good indeed, and I am sorry I was not there, well worth a listen once Doug sorts it out and put it on EdTechRoundUp.com.

I can also recommend joining in the flash meeting anytime you are free on a Sunday evening, a very welcoming space and I’d guarantee that you come away with a few interesting ideas or thoughts. Details are always on the front page of the wiki.