Another positive of being an airhead was that one or two folk noticed my site was down.

And when it came back, in particular A flickr CC search toy, tombarrett tweeted it again with the usual effect, including this one: 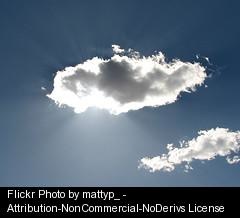 I think I had seen Xpert Attribution tool before but it was not at the front of my mind. Looking at it reminded me of the nice way they add attribution by padding the image at the bottom rather than the way I was doing it (stamping over the image). I had tried to work out how to pad an image before but failed. This morning I spent a wee bit of time digging around the PHP: Function Reference and managed to figure out a couple of things, padding the image, and wrapping the text when it is too wide for the image.

Like the rest of A flickr CC search toy the code is surely pretty horrible, but it seems to work.

I also looked over the How do I properly attribute a Creative Commons licensed work? on the FFAQ – CC Wiki again just to make sure I am keeping within the guidelines.

THe other thing that I’ve changes is to add a 3rd size to the stamped images. I’d avoided the small size as the attribution rarely fitted on the images, now I am padding them they do not present the problem.

Using the stamped image has the advantage of the attribution sticking to the image where ever it goes and as far as online use goes keeping the image under your control an avoilding problems if a user deletes their image when you hot link to flickr.

As always I am interested in any suggested improvements I can make to A flickr CC search toy the idea is still to provide pupils a practical way to use and attribute Creative Commons images from flickr.