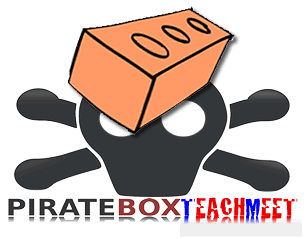 A while ago I proposed A PirateBox for TeachMeet?. Several kind folk donated a fiver and I ordered the Buffalo WZR-HP-G300NH wireless router from an amazon reseller.

First problem was that I did not notice that it was shipping from the USA, it arrive the day before TeachMeet SLF11. I didn’t arrive home until late in the evening, but rolled up by sleeves to sort it out. Problem 2 was a USA power supply. This I rectified at Lunchtime the next day and settled down in a corner of the SECC to sort out the box. Apart from the fact I had plugged the mac into the WAN port rather than the LAN port(or the other way round) I didn’t have a wired connection to the network. A major fail, I realised the port problem the next day after TeachMeet and though ti would now be plain sailing.

I decided to unbrick the router using instructions I found: WZR-HP-G300NH Router: Firmware flash and brick recovery through TFTP After a few tries I noticed extra OS X help in a comment, but still failed. I decided to leave it until today.

This afternoon I had another go, musing again on the comment:

the Mac uses carrier detect to automatically bring network interfaces up and down, and your ethernet interface needs to be up and running at the moment you power the router on, or you’ll miss the little window when the tftp transfer can happen…

I decided to try using linux running on my macbook under virtualbox. The mac had at least given me an “Unsuport MODEL” error after using tftp to flash the firmware, but the virtualbox linux idea got me nowhere.

Based on hope rather than experience I would like t oget the box up and running at teachmeet strathclyde edition.