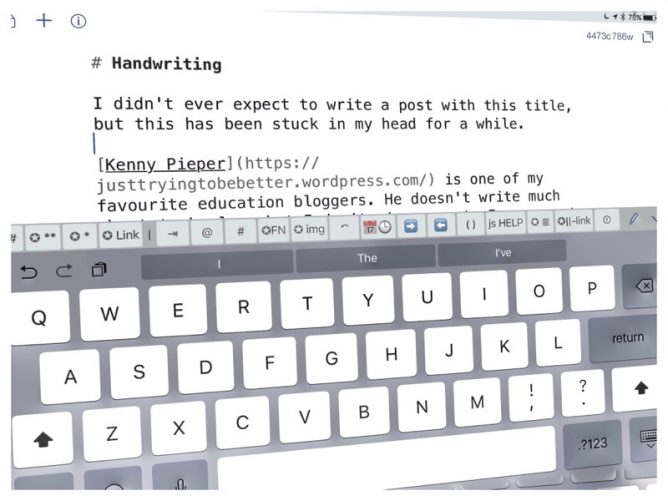 I didn’t ever expect to write a post with this title, but this has been stuck in my head for a while, I started writing it a few weeks ago.

Kenny Pieper is one of my favourite education bloggers. He doesn’t write much about technology but I don’t miss a post (his Book is a good read too).

In a recent post he writes about using google docs with his class and this bit brought me to a halt:

I would never use it with younger kids; they need to write accurately with pen or pencil before they should move on to more focused tools but for seniors it works really well.

From: What’s Up, Docs? Digital Technology in English.

I’ve recently finished my first year in a classroom in nearly a decade. A lot had changed! One of the thing that changed in my classroom is the children each had use of an iPad. I’ve blogged a bit about some of the technical aspects of the experience but not about some of the decisions made about when to use technology and any benefits. At the start of the year I didn’t introduce the iPads straightaway, but established jotters as normal. We discussed the importance of keeping using the jotters and over the year came to some sort of balance. I’d estimate about 1:2 iPad to handwriting ratio. Given that the primary sevens would be going to a new school next session where they would not have 1–2–1 devices I did not want to put them at any disadvantage.

It was a small class and only the older children, the primary sixes and sevens, did a lot of daily writing on the iPads. I’ve not got any statistics or real findings. I do feel that writing digitally has help with some of the processes of writing. In particular the ability and willingness to revise written work. Correcting ones own writing is a lot easier on a device and gives a more pleasing result in the main. Reorganising writing is easier too. Moving paragraphs around, or just creating paragraphs out of a block of text is a lot easier.

That should make improving writing easier? I hope so.

Kenny writes about his own experience of finding examples of his handwriting from the past.

I found a little piece of my own history when I came across the old notebook. Wouldn’t it be a shame if that same opportunity were to be denied to future generations?

From: What’s the point of handwriting?

Which was obviously an enjoyable experience for him. My own history with handwriting has been different.

All the way through school (and university) I got reminded that I would lose marks for my handwriting writing. I can’t recall ever feeling pleased with it.

Left handed, primary seven lessons with pen and ink were a smear. Even with a left handed fountain pen.

At sixteen, taking a shotgun licence form to the local police station my printed ‘signature’ provoked a ‘call that a signature son’, I’ve signed a scrawl ever since.

A gap of nearly 10 years between university and Jordanhill did nothing to improve the situation.

My first permanent head teacher gently suggested I practice writing on the board and at home. This I did for a few minutes at home (copied out the Tao Te Ching), and when I arrived in school. This improved my classroom writing enough to get by. Making Banda worksheets was an extended torture for me. Usually making a mistake right at the end.

When the same head suggested I improve my non-existent ICT skills by taking home a computer for the summer break I was not too keen, but I went along with it. I discover ClarisWorks and the ease of editing. I was much more interested now.

I write a lot. I’d not argue that I am a good writer, but I love blogging, as a way of sharing but more as a way of thinking.

The main difference between my blog and the few journals I’ve kept (I’ve found old travel ones) is that I can read the blog. I can search it too and find what I half-recall.

I don’t know if digital writing is better or worse for pupils literacy. I’ve read various bits of research but nothing conclusive. I certainly feel digital helps me and perhaps some learners.

Update: while this post has been maturing in drafts I read: Can’t Trust It: Typing vs Handwriting which indicates that the water is muddy.