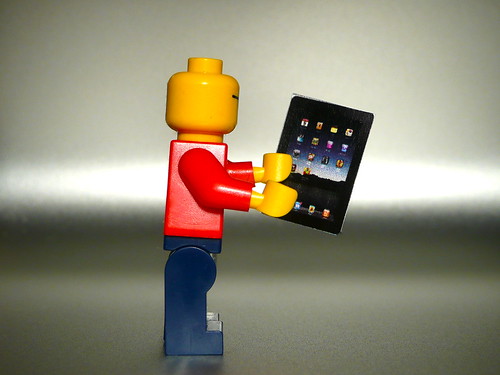 For the last couple of days I’ve been testing an iPad. In many ways a compelling device. I’ve not used it enough to come to any real conclusions but though it worth noting some thoughts.

I am using the iPad to write this post & the first thing I noticed is the easy and  straightforward typing and the relative difficulty of typing tags such as <:p&rt to get to a < you need to hit the number keypad and then the symbols one, switching back to letters and then numbers if you need a /.

At first play the things that the iPad seems best at are viewing and reading tasks, for me email, rss, browsing and quick googles. I may change my mind on that one if I get iMovie or keynote. I would love to see GarageBand for the iPad, it would be great with a touch interface.  It seems faster to check mail by grabbing the iPad than it is to move to the computer.. The speed that the iPad opens and launches apps is very impressive. I spend a fair bit of time reading RSS and google reader works well. I’ve used the iPhone version of netnewswire but as the iPad version is a bit more expensive than I am used to paying for apps I’ve not got that one. Instead i am using google reader and FeeddlerRRS which  is a free reader for iPad FeeddlerRRS uses your google read account too and it seems to work well. I’ve probably read more of my feeds in the last couple of days than the previous week. It is easier to read whole articles on the ipad compared to a phone where I would typically star or bookmark for later consumption. It is also easier to jump to the post and leave a comment.  I don’t think FeeddlerRRS works offline though which was an advantage of NetNewsWire on the iPhone. I could load my iPhone and read feeds on the train without worrying about s connection.

Somethings will take a bit of getting used to. I started this post in Pivot’s mobile interface: 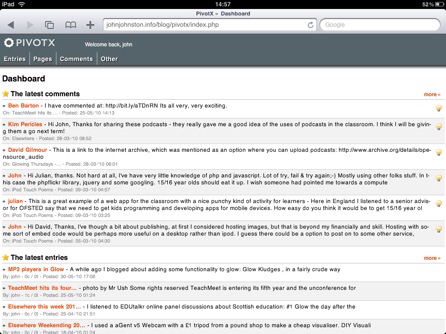 b
This is pretty nice but I rsn into problems when I ‘minimised’ the page: 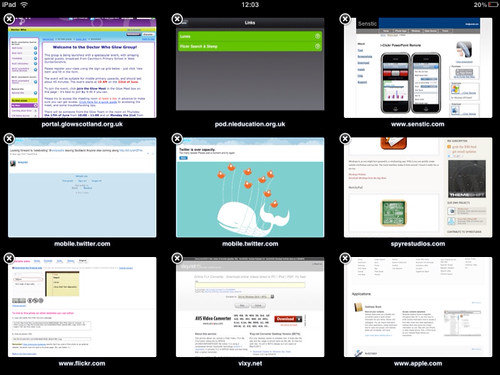 I was thinking of this as equivalent to tabs but found when I swapped back to the pivot page after copying a Flickr embed code that the page reloaded and lost my text! I’ve switched to Notes to prevent this happening again and started using another note to hold snippets:

I am using 2 free apps PhotoPad to edit pics and the iPhone darkslide app to upload to Flickr. I think in the longer term I’d want a more efficient blogging app or I’d use Mail to post to posterous if I was doing a lot of iPad bloggIng.

I’d be interested in trying out some of the HTML apps if they were iphone priced rather than the slightly more expensive iPad ones. I am not sure I’ll be editing much HTML on the iPad.

What is impressive is the easy to use interfaces with all of these apps. I’ve not had to look of help or instructions on any of them. Things just work. The device is surprisingly delightful: the smooth way menus appear or say TweetDeck flips over to display  a webpages link in a tweet is lovely.

I am very interested in seeing how ipads would fit into a classroom and compare use with the iPod Touch. I imagine they would be a powerful shared device, sitting in the middle of a group to be grabbed and passed around better for collaborative work that the Touch.

I am looking forward to testing the iPad in as many ways as I can think of over the next wee while and seeing the possibilities develop.

6 thoughts on “First couple of days with an iPad”